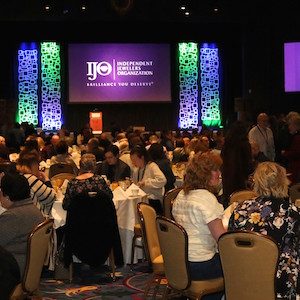 The Independent Jewelers Organization (IJO) has canceled its spring conference, making it one of a number of 2021 events that has fallen victim to the ongoing spread of COVID-19.

The conference was originally scheduled to take place Feb. 26–March 2, 2021, at the World Center Marriott in Orlando, Fla.

A release said that “with the current environment and status of the COVID pandemic, [IJO] felt taking any risks and putting any of their members and/or staff in danger cannot be justified.”

“It has been reported that the next few months will be the toughest in the battle against COVID-19,” said IJO president and CEO Jeff Roberts in the release. “And I feel it is our responsibility to take every precaution necessary.”

He added that IJO will be holding a virtual conference in February, with the dates and times to be announced.

IJO still hopes to hold a conference next summer in Kansas City, Mo., from Aug. 13–17.

“All at IJO are optimistic that with the delivery of a vaccine to the public this situation will vastly improve and allow life to return somewhat to normal,” said the statement.

Earlier this year, IJO canceled the summer conference it intended to hold in July in Baltimore. It was the first time the group had called off a conference in its 48-year history.

Despite the introduction of an FDA-approved COVID vaccine, most industry groups are playing it safe and not holding in-person events in the first third of the year.

All the events around 24 Karat Weekend, which traditionally takes place in early January, have been postponed or are going virtual, and its signature dinner has been called off altogether; several Tucson gem shows scheduled for February, including the AGTA GemFair and JCK Tucson, have been canceled; and the American Gem Society’s Conclave has been postponed from April until later in the year.

Top: A breakfast at a past IJO conference (photo courtesy of the Independent Jewelers Organization)