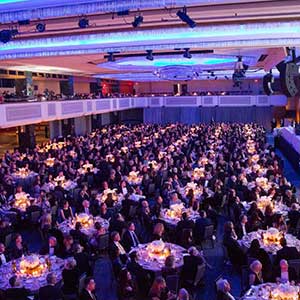 The first weekend in January won’t be the same next year.

The 24 Karat Club of the City of New York has canceled its 2021 banquet, due to the ongoing COVID-19 pandemic.

This is only the third time the banquet, typically headlined by big stars and considered the premier networking event in the jewelry business, has been canceled in its 118-year history.

The club’s traditional spring and summer events, including its Summer Celebration and Golf Outing, have also been canceled—for the first time in the club’s history. Its fall membership meetings will be held virtually, another first.

Two other mainstays of 24 Karat weekend—the Jewelers’ Security Alliance and Jewelers Vigilance Committee luncheons—will hold virtual events in January, as opposed to their traditional in-person luncheons. Dates and times for those events have not yet been announced.

The 24 Karat Club has canceled its signature annual event only twice before: the first time in 1918, due to World War I, and then in 1943, during World War II. Even the 2002 event, held four months after the 9/11 terrorist attacks, took place as scheduled.

“While we are, of course, incredibly disappointed to cancel the Banquet, the health and safety of both members and guests is paramount,” said Jeffrey Fischer, club chairman, in a statement. “The Club’s board looked at a variety of options, including a scaled-back event, but it was clear that canceling it altogether was the only responsible choice.”

Last year, the event was held at the Sheraton Hotel in New York City,  following two years at the Hilton. In 2016, it was forced to depart its longtime home at the Waldorf Astoria, due to that building’s remodeling.

There is still no word on what will happen to Jewelers of America’s annual Gem Awards, which are typically held the night before the 24 Karat Club event.