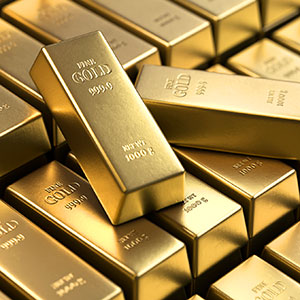 The spot prize of gold crossed the $1,700 barrier on Wednesday, and it’s now trading at its highest level in seven years.

This is the second time this month that gold has crossed the $1,700 benchmark; its spot prize crossed it briefly on April 6. But this time, it seems to have consolidated those gains. It opened Thursday morning at $1,717 at ounce, and at the time of publication, the spot price was trading at $1,736 an ounce.

The gold price has been on the rise for more than a year. It crossed the $1,600 mark in February, and, though it subsequently retreated, the current COVID-19-fueled turmoil seems to have set expectations sky-high.

“The wind is very likely in gold’s sails,” said Rick Rule, president and CEO of Sprott, which specializes in precious metals, in a gold primer. “When gold moves it tends to really, really move.”

While analysts noted that gold has typically served as a safe haven in times of crisis, they also said that low interest rates and increasing government debt—not to mention the sorry state of the U.S. stock market—were fueling the metal’s ascent.

“The thing that’s moved the price of gold mostly in my career has been faith—or lack of faith—in the ongoing purchasing power of the U.S. dollar; most importantly the U.S. dollar expressed by the U.S. 10-year Treasury,” Rule said.

He noted that the federal debt, which had already hit a record $22 trillion before the COVID-19 pandemic, will be further ballooned by the trillion-dollar bailout efforts passed by Congress last month.

Ordinarily, this would be a time for retailers to reactive their trade-in business—which was a lifeline to many in the last decade—but many are now closed because of the coronavirus.

And while some may be tempted to conduct this business out of their homes, this carries not only possible security and health risks, but also legal risks.

“This is a terrible idea,” says Sara Yood, senior counsel of the Jewelers Vigilance Committee. “Almost all jurisdictions (both state and local authorities) have legal requirements around purchasing precious metal/gems/jewelry secondhand, including requiring a secondhand-dealer’s license as well as specifically calibrated scales in order to provide the troy weight of the item to the person selling it. It is unlikely that someone would have this kind of setup at home or be able to get set up based on these requirements. They would also need to capture government-issued ID/know-your-customer information for each person selling them precious metals or gems.”

While some businesses have been set up to do take-ins by mail, they “have secure facilities, [can] open, sort, weigh packages on camera, and have all of the required licenses and equipment to provide this service,” she said.