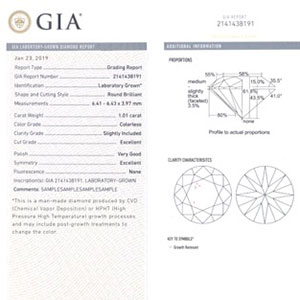 In a long-awaited decision, Gemological Institute of America (GIA) has opted to change its reports for lab-grown diamonds by jettisoning the word synthetic, though it will still use a different grade scale than it does for naturals.

Formerly known as “Synthetic Diamond Reports,” the reports have been re-dubbed “Laboratory-Grown Diamond Reports”—a bow to the Federal Trade Commission (FTC) removing synthetic from its list of recommended descriptors.

But the GIA will still grade the color and clarity of man-made diamonds with descriptive ranges, rather than the more familiar detailed scale it uses for naturals. (For color, that means five ranges: colorless, near colorless, faint, very light, and light.) However, next to the ranges will be info about what grades they encompass. So instead of just grading the diamonds “near colorless,” GIA will note the grade range: G through J.

“The corresponding letters will appear next to the words,” says GIA spokesperson Stephen Morisseau.  “We will say colorless. But we also say colorless is equivalent to the range D, E, F.”

According to GIA’s executive vice president and chief laboratory and research officer Tom Moses, the original GIA scale was developed in the 1950s to measure rarity. But lab-grown diamonds are harder to measure in those terms.

“[The original] continuum was one of rarity. D was the rarest, getting less rare with more yellow color. If you think of [lab-grown diamonds], there is no correlation to that.  This population, if you want to grow D, you dial the knobs.”

The question for GIA was, “Does it make sense to have a system that was designed for this population distribution of natural diamonds, and apply it to [lab-grown]?” Moses says. “Or, just as happened 75 years ago, do you wait and look at [the new] distribution and then make a system, if the public wants it? Certainly, logically, that would make more sense. What the public wants, we just don’t know.”

He notes that most synthetics on the market encompass a narrow band of colors and clarities.

He says that GIA has found that “the colors are getting compressed, as are the clarities. [Director of research and development] Wuyi [Wang] was recently in China, buying some things. And I said, ‘Get some really low quality.’ There are none.”

So GIA worried that, if it adapted the natural scale to the non-natural product, it “might be unintentionally party to misleading the consumer, in making a correlation of rarity,” Moses says.

He admits that the different scale will likely deter growers from submitting their diamonds to GIA. Most man-made companies favor rival labs that use the full grading scale.

“Is this going to change [submissions] dramatically?” Moses asks. “If I would have to guess, I would say no, but I don’t know.

“Producers will call us and say, ‘You give us [the same scale as naturals], I’ll give you 1,000 stones. Think of how much money you’ll make.’ We are not driven by the money. That isn’t the point.”

The reports will not include information about whether the specific diamond has been treated, but will all come with a general comment indicating many man-made diamonds are treated: “This is a man-made diamond produced by CVD (Chemical Vapor Deposition) or HPHT (High-Pressure High-Temperature) growth processes and may include post-growth treatments to change the color.”

“That is the most practical [solution] at this point,” he says. “We [noted treatments on the synthetic reports] for probably a decade, [It] is not trivial to do.”

Sometimes, he adds, the treatments are done in the same device where the diamonds are grown, right after growth.

“If [a grower] has just turned off the nitrogen feed and the hydrogen feed, but leaves the temperature elevated, and never takes it out of the chamber, is that a treatment? This is the debate we have internally.”

The FTC Guides say that a treatment has to be disclosed if it is not permanent, requires special care, or creates a value differential. The current treatments don’t fulfill either of the first two criteria, and it’s not clear if treated lab-grown diamonds show a value differential, he says.

“[We asked:] Does the consumer need to know [a diamond was treated] to make the right buying decision? When you read those three points in the Guides, we don’t know if it’s a requirement.

“Ultimately our job is to protect the consumer and give the consumer information that helps them make informed decisions…. It just seems like [looking for treatments] was a lot of added work for no value to the consumer.”

However, the GIA will note that a stone is “as-grown,” if that’s requested.

“We would do it, like we do with naturals, but there’s an extra fee,” Moses says. “If they want to know if it’s been treated, we could do it.”

GIA looks at these new reports as part of an ongoing evolution in how it looks at lab-grown diamonds—and it might make further changes, as the market continues to change.

As part of this, it’s been conducting focus groups, to understand what consumers want.

“At this point, [consumers] are confused,” Moses says. “Some answer, ‘A GIA report, I’d like one of those.’ Others answer, ‘Why would you want that for this?’… As there is more material in every town’s retail jewelry store, the opinion may begin to change one way or another. We are spending a lot of money to understand that, with the goal of doing right for the public in the end.”

One possibility: GIA might develop an entirely new scale for man-made diamonds, with three broad categories.

“We are trying to keep an eye on the horizon, which is the consumer, and not get caught up in the stone throwing,” Moses says. “We can’t be driven by that…We are listening to everybody, but the public mainly.”

Reaction from the lab-grown community was mixed. Some saw the new reports as a step forward and were happy that GIA did away with the word synthetic, which they believe consumers understand to mean fake. (Moses notes that when lab-grown diamonds are discussed in scientific journals, the term synthetic is always used, even by people that produce them.)

Others were disappointed that GIA won’t grade lab-grown diamonds the same as naturals, especially since Antwerp lab HRD just announced it would do so.

“This decision is a direct violation of GIA’s code of conduct, mission statement, claims of impartiality, and is an unethical misalignment of the public’s interests,” says Jason Payne, founder of Ada Diamonds. “GIA has been grading laboratory-grown diamonds with full fidelity for years. This information has been stored internally and intentionally withheld from the public.”

The updated reports will be available beginning July 1, 2019. Any GIA Synthetic Report issued since Jan. 1, may be returned and exchanged for the new Laboratory-Grown Diamond Report at no cost.

UPDATE: GIA just put out a visual guide to the changes.