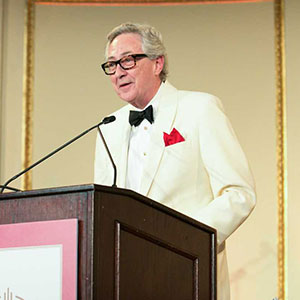 Introducing Chandler, AGS board member Georgie Gleim hailed his years of service to the DCA and noted that, now that the group is affiliated with Jewelers of America, “Terry is  proud to have his name on a door in Manhattan.”

Accepting his Triple Zero Award, Chandler spoke fondly of AGS, saying the group had assisted him many times over the years.

“I was particularly excited and impressed at the Nashville [AGS] Conclave to see the enthusiasm and vigor of the Young Titleholders group,” he said. “I gotta tell you, the industry is in good hands.”

He also thanked AGS for “letting me take their deputy executive director [Cindy Chandler] as my wife 11 years ago.”

Bouffard, who was also awarded a Triple Zero, was introduced by former Jewelers of America president and CEO Matt Runci, who has made only rare appearances at industry functions since his retirement in 2012.

Runci said that, thanks to Bouffard’s corporate social responsibility efforts at Signet, the company “is now spoken in the same breath as Signet and Apple in term of having CSR at the highest level.”

In his speech, Bouffard, who was recently appointed chairman of the Responsible Jewellery Council, said he was “proud to be part of a company that takes its leadership position in the industry seriously, values integrity, collaborates with its business partners, and actively works toward the continuous improvement in the integrity of the global jewelry supply chain.”

Lussier, accepting the AGS Lifetime Achievement Award, talked about his long career working for De Beers, starting with a post at its former ad agency N.W. Ayer. He said that what kept him interested in the diamond industry were three things—“the people, the platform, and the product.”

“This is an industry of colorful characters with big ideas that make things happen,” he said. “But what has always fascinated is how diamonds make people feel.… Expressing love and commitment is a precious and powerful moment and it requires something powerful and precious to express that, something that is inherently a precious thing. And that is just a lovely way to spend one’s life.”