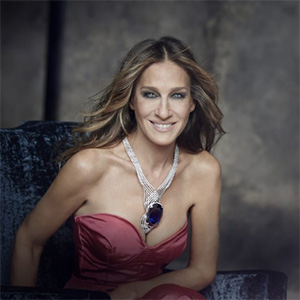 According to court documents, lawyers for Kat Florence filed an amended complaint Sept. 12 that includes the allegation that Parker borrowed around $150,000 in jewelry from the brand and never returned it.

If you’ll remember, Parker and Kat Florence were collaborators on a diamond jewelry line, the Sarah Jessica Parker D-Flawless Diamond collection, released in 2016.

But relations between the two started going south soon after shooting the collection’s first ad campaign with fashion photographer Peter Lindbergh, according to both parties.

Florence filed suit against the actress in April 2018, claiming she shirked a number of agreed-upon promotional responsibilities, including attending the primary launch event. The company claims Parker’s absence, among other dropped duties, damaged the line’s chances of success.

Parker countersued in July for $6.125, alleging that the jeweler stopped upholding its end of the deal by neglecting to pay her several agreed-upon fees.

The amended complaint, filed by Kat Florence Design last week, alleges that Parker asked to borrow roughly $150,000 in Kat Florence jewels during a photo shoot in 2016, with the understanding that she would return the jewelry. “To date, Ms. Parker having received and maintained the jewelry as described above in her possession has failed to compensate the Plaintiff for the same,” reads the complaint. The jewelry brand is seeking an additional $150,000 in damages.

Requests for comment from Kat Florence and Sarah Jessica Parker’s legal representation were not returned. But Ira Schreck, an attorney for Sarah Jessica Parker, told news outlet The Blast, “This is just plain false. SJP was under contract to Kat Florence and was asked to keep the jewelry so that she could wear it on red carpets and other events when appropriate. Sarah Jessica Parker is as honest and trustworthy a person as anyone I have ever met. She has never and would never hold on to anything belonging to someone else. In fact, she has been asking ever since Kat Florence wrongfully stopped paying her to have the pieces returned, but Kat Florence didn’t seem terribly interested in getting them back.”