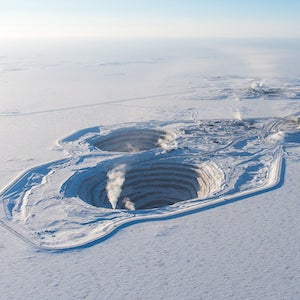 The fate of Canadian diamond mine Diavik (pictured) is currently “at risk” due to the continued insolvency of junior partner Dominion Diamond Mines, according to a recent court filing from its majority owner, Rio Tinto.

Dominion, which filed for protection from insolvency in April, owns 40% of Diavik. Rio Tinto owns the other 60%, and it manages the mine’s operations through subsidiary Diavik Diamond Mines Inc. (DDMI).

In an Oct. 19 affidavit, DDMI finance manager Thomas Croese noted that in June, DDMI was granted the ability to hold Dominion’s share of production, given the company’s inability to meet scheduled “cash calls” to keep the mine running. Dominion currently owes the joint venture a total of 119.52 million Canadian dollars (approximately $90 million), plus interest and fees, Croese said.

DDMI is now asking the court for the right to sell Dominion’s share of production, arguing that DDMI was shouldering too heavy a financial burden by having to cover Dominion’s obligations without getting anything in return.

Croese added that for Diavik to continue operating, DDMI would need additional financing from owner Rio Tinto. However, the mining giant said it’s not willing not kick in any more cash without the assurance that DDMI will be able to cover its current debts.

Croese asserted that, while diamond market conditions and demand have improved in recent weeks, the market’s outlook remains “highly unsure and volatile.” Diamond jewelry demand in the United States remains “fragile,” and COVID-19 is growing at “alarming rate” in India, potentially disrupting the industry’s supply chain, he said.

Longtime partners Rio and Dominion have feuded throughout Dominion’s insolvency process. In June, Dominion sued Rio Tinto in the Supreme Court of British Columbia, charging the majority partner had mismanaged the mine.

Dominion Diamond Mines also owns the nearby Ekati mine, the first diamond producer in the Northwest Territories of Canada.

Earlier this month, three insurers beat back an attempt by Washington Companies, which controlled Dominion pre-filing, to buy back the company. That led Ekati, which has been on care and maintenance since March, to begin a series of layoffs—reportedly without providing workers severance.