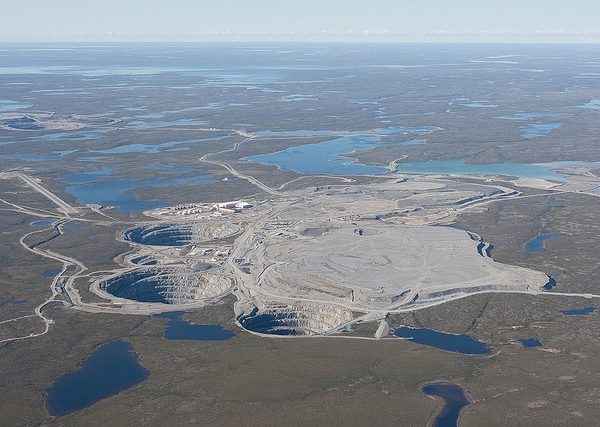 Dominion Diamond Mines, which owns the Ekati mine in Canada’s Northwest Territories (pictured) as well as 40% of the Diavik mine, has filed for insolvency protection under the Companies’ Creditors Arrangement Act (CCAA).

The company has obtained a proposal for debtor-in-possession financing from current owner Washington Companies. Washington has also made a stalking-horse bid that would involve a renegotiation of its current capital structure with creditors. That bid would require the company to solicit other bidders either to acquire its assets or a stake in the company.

“Whether or not Dominion agrees to the Washington proposal, it expects as part of the restructuring to obtain new financing, which combined with the company’s available cash, should provide sufficient liquidity to continue to operate during the CCAA process for the benefit of local communities and other stakeholders,” said a company statement.

A source close to Dominion tells JCK: “This is not a liquidation. They are not going out of business.”

The company blamed the filing on the COVID-19 pandemic, which caused the closure of the Ekati mine on March 19. (Diavik continues to function.)

“Although the company has strong diamond inventory, sorting houses and diamond markets are closed,” it said. “[T]here is no ability to generate sufficient revenue to support Dominion’s ongoing financial obligations.”

It added: “Dominion continues to believe in the long-term viability of its assets and expects to emerge stronger and better able to deliver value to all stakeholders.”

Credit rating agencies had long looked skeptically at the company’s bonds, as its $1.2 billion purchase by Washington Companies in 2017 was heavily debt financed.

In October, Moody’s Investor Service changed its outlook on its bonds from “stable” to “negative,” citing its “weak liquidity.” It noted that the production at Ekati would likely drop in 2023, raising doubts about its ability to pay the $550 million second lien debt maturity due in November 2022.

And on April 10, Fitch downgraded its bonds to CCC.

“The ratings reflect [Dominion’s] continued underperformance and need to consistently negotiate covenant relief, exacerbated by the uncertainty associated with the coronavirus pandemic,” it said.

Dominion began life as Aber Resources in 1980. Its founder, Gren Thomas, is credited with discovering Diavik in the early 1990s. Daughter Eira, who was also part of the Diavik discovery, now heads Lucara Diamond.

In 2004, Aber purchased a majority stake in Harry Winston and acquired the entire chain two years later. It used Harry Winston as its company name from 2007 until it sold the brand to Swatch in 2013. That same year, the company, rechristened Dominion, bought the Ekati mine from BHP, which was exiting the diamond business.

In 2017, Washington Companies purchased the miner, following a fight with activist investors. In February, it appointed a new interim CEO, Patrick Merrin, the third since its Washington purchase.