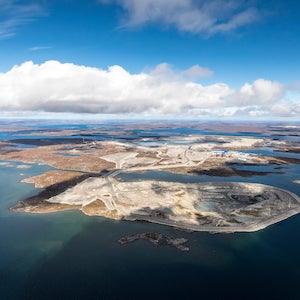 Dominion Diamond Mines’ recent filing for protection from insolvency has sparked tension between that company and Rio Tinto, its longtime partner in the Diavik diamond mine (pictured).

Diavik, based in Canada’s Northwest Territories, is currently run by Diavik Diamond Mines Inc. (DDMI), a subsidiary of Rio Tinto, its 60% owner. Dominion owns the remaining 40%.

In filings before the Court of Queen’s Bench in Alberta, Canada, the two partners sparred over whether Dominion should keep receiving diamonds from Diavik and whether the mine should continue to operate in this time of COVID-19.

DDMI complained in a May 8 filing that Dominion gave it “no notice” of its April 22 insolvency filing or that it wouldn’t able to make that day’s scheduled “cash call” to fund the mine’s operation.

It said that it’s been covering for Dominion’s missed payments out of its own pocket—as not doing so would “place the assets of the joint venture and the operation of the Diavik Mine at risk.”

It asked that the court let it hold Dominion’s share of diamonds from the joint agreement, until its junior partner is able to pay for its share of the mine’s operation.

Dominion, however, argued that the problem was DDMI’s decision to keep Diavik operating, at a time when the diamond industry has been virtually shut down. (Dominion owns the Ekati mine, also in Canada’s Northwest Territories. Ekati was placed on care and maintenance on March 19.)

Dominion chief financial officer Kristal Kaye further complained that “Dominion Diamond has had for some time, and continues to have, concerns with the way in which DDMI has operated” Diavik.

“[DDMI] has adopted a high-grade approach [in mining], which makes little economic sense and is destructive of value,” she said.

DDMI chief financial officer Thomas Croese countered that his company has successfully operated Diavik for 16 years, in a way that’s shown significant social benefit to the area’s economy, particularly local indigenous communities. The mine is due to close in 2025.

Since putting a mine on maintenance also incurs costs, Croese argued that economics favor Diavik continuing to operate with proper COVID-19 precautions. He asserted that, since the mine can only operate with a “winter road,” and the road’s costs rise in the second quarter, even if Diavik were placed on maintenance, Dominion would still have to pay approximately 85% of its joint-venture obligations over the next two months.

On May 8, court justice Kristine Eidsvik ruled that Diavik must supply goods to Dominion that it found in the first half of April, given that Dominium made its early April cash call. But she delayed ruling on the question of whether Dominion will continue to receive goods going forward.

In related news, on May 6, Eric Hoff, senior analyst at DDJ Capital Management, a company bondholder, asked that the court allow greater scrutiny of Washington Companies’ stalking-horse bid for Dominion.

Under the proposal, Washington would provide Dominion with debtor-in-possession financing and then repurchase the company via an affiliate following a renegotiation of its capital structure. Washington Companies purchased Dominion for $1.2 billion in 2017.

“The proposed funding and repurchase by equity owners who, by definition of these insolvency proceedings, no longer hold an economic interest in Dominion Diamond and its affiliates and who are in an advantaged position by virtue of their longstanding privileged access to confidential information, is highly unusual and can lead to abuses and inequities without proper checks and balances,” Hoff said.