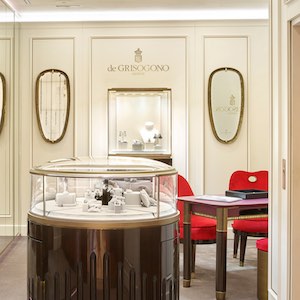 High-end jeweler de Grisogono has filed for bankruptcy in Switzerland, shortly after reports linked it to shell companies controlled by Isabel dos Santos, the daughter of Angola’s former president, and her husband, Sindika Dokolo.

In a statement, the company told JCK that it has been up for sale for “several months now.

“Despite important progress, the transaction did not go through,” it said. “Without financial support from the current shareholders and without a new investor, unfortunately, the company cannot continue as a going concern.”

If the court approves its filing, all of its 65 Swiss employees will be dismissed, it said.

The company did not comment on how this might affect the company’s U.S. operations, including the store it opened in New York City in 2017. The company says it has 16 boutiques worldwide.

Last week, the International Consortium of Investigative Journalists reported that the company’s main shareholders are Dokolo and Sodiam, Angola’s state-controlled diamond agency. Sodiam announced plans to divest from the company in 2017.

The company has declined to comment on its shareholding structure.

De Grisogono was founded in 1993 by Italian-Lebanese designer Fawaz Gruosi, who told ICIJ he left the company last year. The fine jeweler soon made a name for itself with its signature use of black diamonds. The brand also became a red carpet staple, with celebrities including Natalie Portman and Naomi Campbell wearing its jewels.

In November 2017, Christie’s Geneva sold a 163 ct. D flawless diamond set in a necklace by de Grisogono and dubbed the “Art of de Grisogono.” It fetched $33.7 million.

But that sale was marred by the same controversy that may have brought the brand down. During the auction, gem explorer Yianni Melas undertook a water-only hunger strike to protest what he called the inequity of Angola’s riches benefiting dos Santos, considered Africa’s richest woman.

“All the proceeds from this sale should go towards building a children’s hospital in Angola,” he wrote on social media. “For Isabel [dos Santos] it’s pocket change, for the children of Angola it’s life and death.”

In response to the recent news, Melas told JCK: “It’s a lesson for future leaders and companies associated with corrupt governments that justice prevails.”

On Twitter, Isabel dos Santos, whose assets have been frozen by the new government in Angola, called the allegations “extremely misleading and untrue.

“This is a very concentrated, orchestrated and well-coordinated political attack,” she said, adding that she had enlisted lawyers to “take action” against what she termed “defamatory” reports.

This is a very concentrated, orchestrated and well-coordinated political attack

This article has been updated with comment from Yanni Melas