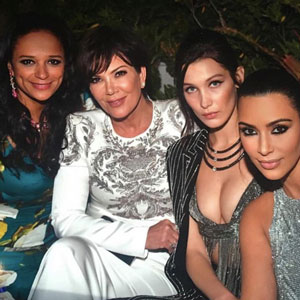 According to the International Consortium of Investigative Journalists, which shared more than 700,000 supporting documents it obtained with The New York Times, Isabel dos Santos—Africa’s richest woman and the daughter of Angola’s former president, José Eduardo dos Santos—and her husband, Sindika Dokolo, funded de Grisogono and roughly 400 other companies through a series shell companies based in Luxembourg, Malta, and the Netherlands. These companies fleeced the people of poverty-stricken Angola of more than a billion dollars over several years.

The company’s marketing director returned an emailed request from JCK to check facts in the article with “the company has no comments to make at this moment.”

Several Western consulting firms, including the Boston Consulting Group, McKinsey & Co., and PwC (formerly PricewaterhouseCoopers), helped clear the path for money laundering, corruption, and theft. Since 2013, De Grisogono has been run by a team recruited from the Boston Consulting Group, which financed decadent annual parties (always well-attended by celebrities) on the French Riviera for the brand using Angolan state funds.

Dos Santos’ estimated worth surpasses $2 billion—a fortune she always has claimed was self-made. But according to the mound of documents obtained by investigative reporters Ben Hallman, Kyra Gurney, Scilla Alecci, and Max De Haldevang, dos Santos’ father (when he was Angola’s president) signed decrees that led to her amassing her great wealth. With help from the head of state, she acquired “stakes in the country’s diamond exports, its dominant mobile phone company, two of its banks, and its biggest cement maker, and partnered with the state oil giant to buy into Portugal’s largest petroleum company,” according to the New York Times.

PwC, perhaps the Western world’s most prestigious accounting firm, was de Santos’ accountant and tax adviser, “working with at least 20 companies controlled by her or her husband,” according to the article. But the firm ignored obvious red flags, said Ricardo Soares de Oliveira, an international politics professor at Oxford who studies Angola. In the article, he called the Western consultants, “all-purpose providers of whatever these elites are trying to do—they have no moral status, they are what you make of them.”

Dokolo remedied this by entering into a 50-50 venture with Sodiam, the Angolan state diamond marketer, that was set up in Malta, according to the Times. “The state enterprise eventually pumped more than $120 million into the business, acquiring equity and buying off debt.” Furthermore, “Dokolo put in $4 million, an amount he had gotten from a ‘success fee’—drawn from the Sodiam money and shunted through a shell company in the British Virgin Islands—for closing the deal.”

But under Leitão, de Grisogono cratered. Marketing budgets were disproportionally boosted, dos Santos and her husband took jewelry and watches without paying for them up front, and the company spent a stunning $1.7 million on its Cannes Film Festival soiree in 2013.

An Angolan court froze dos Santos’ and Dokolo’s assets in late December as part of a corruption investigation that doesn’t directly involve de Grisogono—but the jewelry company’s finances will be closely studied as part of the case. The Angolan attorney general claims the couple are responsible for more than $1 billion in lost state funds.

Here’s what’s under scrutiny by the court: In 2016, José Eduardo dos Santos named daughter Isabel dos Santos head of the Angolan state-owned petroleum and natural gas production company Sonangol. She was in the role through November 2017, at which time incoming President João Lourenço announced her firing. Hours after she was fired, $38 million in payments from Sonangol were made to a Dubai, United Arab Emirates, shell company allegedly controlled by dos Santos.

The couple could face several years in prison if convicted. Dos Santos, 46, and Dokolo, 47, have denied any wrongdoing.

Gemstone hunter Yianni Melas, author of the popular @gemexplorer Instagram has been anonymously reporting on Isabel dos Santos and her family since 2017 on another Instagram feed, @degrisogononews (he’s called the Angolan government a “kleptocracy”). Melas, who went on a hunger strike to protest Christie’s auctioning a de Grisogono necklace with an Angolan diamond in 2017, revealed himself as its author yesterday in an IG post that reads: “I couldn’t be happier to read the news on Isabel Dos Santos and the leaked documents that prove that her and her father destroyed her country of Angola.”

Top, from left: Isabel dos Santos, Kris Jenner, Bella Hadid, and Kim Kardashian West at an event in 2016 (via: @pedro.ferreira.hipolito)