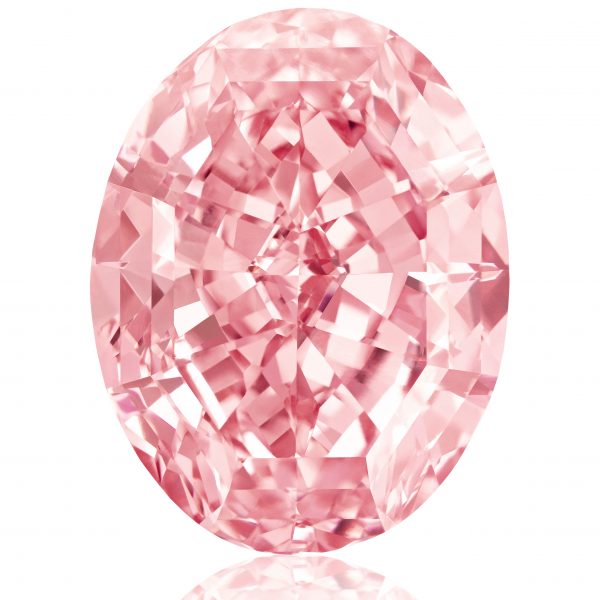 I saw some odd web ads last week. While I was surfing, notices kept popping up for the Pink Star, a 59.6 ct. internally flawless fancy vivid pink oval that Sotheby’s is auctioning off in Hong Kong on April 4. Generally, I receive ads for stray items from Amazon, which cost—let’s just say—far less.

Sotheby’s spokesperson Darrell Rocha says they appeared because of my surfing history: “These display ads have become very common for us over the last couple of years, for all categories. You likely visited our site around the time that you then saw the ads on others.” 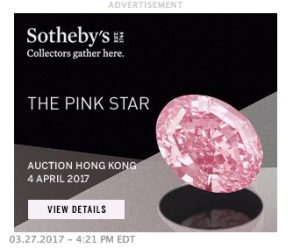 In any case, the ads show that Sotheby’s is pulling out all the stops for the Pink Star for when it hits the block. The first time it went under the hammer, in November 2013, the stone garnered $83 million, a record price for a diamond at auction. However, that sale (unusually) ended up canceled, and Sotheby’s (in another unusual move) took the diamond into inventory. There it’s sat for three and a half years; it’s unclear if the auction house has tried to sell it privately.

The Pink Star is an incredible, impressive diamond—and that’s the problem. It may be too impressive. Sotheby’s seeks $60 million for it on Tuesday. While that’s less than the $72 million the auction house valued it at post-auction, it would also set a new world record. (That record is currently held by the Oppenheimer Blue, which fetched $57.5 million in May 2016.)

The auction market for big diamonds has seen some spectacular successes and some painful misses over the past few years. The Pink Star is an amazing stone, but the market for it is limited—not many people have $60 million lying around. It’s not known what the reserve is, but it certainly appears the diamond will have to smash all records, or at least come close, to sell at all. Which is why the trade may watch Tuesday’s auction with some anxiety. Not selling a second time would send a bad signal about the market for high-end rocks. But hitting a new world record is not an easy bar. Basically, the Pink Star is going big, or it’s going home.