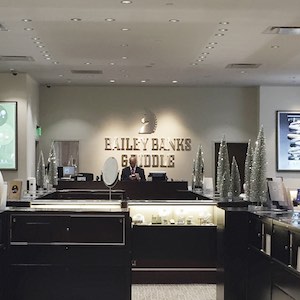 The only Bailey Banks location currently listed as open on its website is at Town & Country Village in Houston. Its stores in Dallas and Plano, Texas, have been closed, its site says.

Bailey Banks & Biddle started the year with five stores. However, by March it closed two stores—one in King of Prussia, Pa., and the other in Houston.

An email to AJ Jafari was returned with an auto reply that said he had resigned as the the chain’s president.

“I am presently serving in a consulting role during the transition [to] a new management team,” it added.

Neither the company’s attorney nor customer service returned email requests for comments by press time.

The chain’s owner, the BBB Group, is also contending with a tax suit from the Spring Branch Independent School District, first filed last May in Harris County, Texas, district court.

In an amended complaint entered Aug. 7, the Spring Branch district claimed BBB owed it $162,080 in taxes, as well as $49,610 to the city of Houston. BBB filed a response in February, calling the claimed amounts “excessive.”

Bailey Banks is frequently described as one of America’s oldest—and most prestigious—jewelers. Founded in 1832, it was purchased by Zale Corp. in 1962. In 2007, Zale sold the chain, which then comprised 70 stores in 31 states, to Finlay. But Finlay liquidated two years later, and that version of Bailey Banks closed with it.

In 2009, the brand’s intellectual property was purchased by Synergies Corp., a company that John J. Carney, the court-appointed examiner for Firestar Diamond, has linked to Indian diamond magnate Nirav Modi. Modi was arrested in London in March, after Indian authorities charged him with bank fraud. Modi denies the charges.

According to the U.S. Patent and Trademark Office, the trademark for Bailey Banks & Biddle is held by Diamond Holdings S.A., a company based in Switzerland. Swiss government records list Nirav Modi as the president of that company.

Since its resurrection in 2009, Bailey Banks has been through a series of management changes and was briefly run by former Zale executive Paul Leonard and Smyth Jewelers.

The company was founded in 1832 as Bailey and Kitchen, and its fabled history includes designing inaugural invitations for President James Buchanan and a silver mug for Abraham Lincoln.