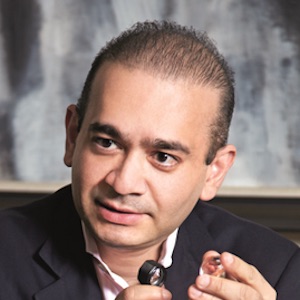 Nirav Modi (pictured), the 46-year-old diamond powerhouse who went from vaunted billionaire to wanted fugitive almost overnight, has been arrested in London, says a release from India’s Ministry of External Affairs.

Following an appearance in Westminster Magistrates Court today, Modi was denied bail, with the judge labeling him a flight risk, according to a report from India’s public news agency.

Modi’s lawyer in London, George Hepburne Scott, said he planned to fight any possible extradition, adding that Modi feels the charges against him are “politically motivated,” according to Reuters.

Zulfiquar Memon, a Mumbai-based lawyer for Modi, told Forbes: “Up until now, we’ve only heard [the government’s] side of the story. Now, for the first time, we’ll have his petition, his statement, his apprehensions.” He declined comment to JCK.

Modi’s world began unraveling in February of last year, when India’s Central Bureau of Investigation registered a First Information Report (FIR) against him, alleging he defrauded state-owned Punjab National Bank (PNB) of some $2 billion by using phony letters of undertaking. In May 2018, he and 24 associates were officially charged with violations of the Prevention of Corruption Act, court records show.

Afterward, Modi seemed to disappear. Last summer, Interpol issued a Red Notice against Modi as well as Mihir Bhansali, the CEO of three Modi-owned companies in the United States. (Bhansali has denied any wrongdoing.) In December, V.K. Singh, head of the Ministry of External Affairs, told India’s Parliament that the government had located Modi in the United Kingdom.

But not much became of it until last week, when British newspaper The Telegraph tracked him down on the streets of London and interviewed the seemingly annoyed beard-sporting mogul as he waited for a cab.

Exclusive: Telegraph journalists tracked down Nirav Modi, the billionaire diamond tycoon who is a suspect for the biggest banking fraud in India's historyhttps://t.co/PpsjGeFEsy pic.twitter.com/v3dN5NotzQ

According to the newspaper, Modi had set up a new jewelry company while in London.

Following the interview, India’s Enforcement Directorate (ED) tweeted that the home office of the U.K. Central Authority had sent an extradition request to the Westminster Magistrates Court.

The news of Modi’s arrest comes as the ED registered new charges against him and 26 others for alleged violations of the country’s Prevention of Money Laundering Act. A court subsequently issued a warrant for Modi’s wife Ami, the ED said.

Modi’s connections to the United States include three now-closed stores that bore his name in Las Vegas, Honolulu, and New York City.

He also previously owned three diamond and jewelry companies, A. Jaffe, Firestar Diamond, and Fantasy Inc., which filed for bankruptcy last year. A. Jaffe has since been purchased by Paramount Gems and no longer has any connection to its prior owner.

The court examiner in that case also connected associates of Modi to Houston-based jewelry chain Bailey Banks & Biddle. That retailer, which recently closed two stores, did not return a request for comment.

In February 2018, Modi’s uncle, Mehul Choksi, the former chairman of Samuels Jewelers, was also charged along with his nephew. He has denied the allegations. His current whereabouts are unknown.