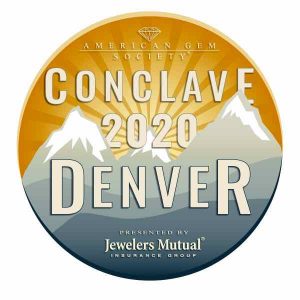 The American Gem Society (AGS) has announced that its Conclave—the group’s signature annual education event and get-together—has been canceled for 2020.

The event was scheduled to be held April 27–29 at the Sheraton Denver Downtown Hotel in Denver. All registrations will be refunded, and the hotel has a 72-hour cancellation policy.

This marks only the third time in 86 years that the Conclave will not continue as planned. The two other times were in 1944 and 1945, when the event was canceled due to World War II.

The decision was made following Friday‘s national state of emergency declaration due to the coronavirus. On Monday, the Centers for Disease Control and Prevention recommended the any event that will draw more than 50 people for the next 60 days be canceled.

The AGS said that it is exploring options for a virtual mini-conference for later this year. It also plans to enhance its online learning portal, AGS Pro.

“If there is a silver lining to any of this, it’s that we get to announce our 2021 plans sooner than later,” said Alexis Padis, chair of the Conclave subcommittee, in a statement. “We are thrilled to be heading to Louisville next year. What’s especially exciting is that Conclave will take place right before the Kentucky Derby, which will add to an already exceptional week.”

Added Katherine Bodoh, chief executive officer of the American Gem Society and AGS Laboratories, in the same statement: “Conclave is more than an event, it’s an experience. We are tremendously saddened by our decision, but we saw no other choice. The health of our members is a priority.”

Actor Henry Winkler was scheduled to be this year’s Conclave keynote speaker.

The AGS Conclave is just one of a number of industry events that have been canceled or postponed this year due to the coronavirus, including JA New York, Baselworld, and Watches & Wonders Geneva (the former SIHH).