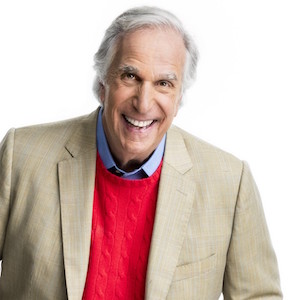 Henry Winkler (pictured), best known for his portrayal of Arthur “Fonzie” Fonzarelli in the 1970s sitcom Happy Days, will deliver the opening keynote at the American Gem Society’s (AGS) 2020 conclave in Denver.

Known as an actor, producer, director, and New York Times best-selling author—not to mention for his ability to make a jukebox play with just his fist—Winker last year won an Emmy Award for outstanding supporting actor in a comedy series for his role as Gene Cousineau on the HBO series Barry.

His April 27 presentation will deal with overcoming adversity, featuring anecdotes from his career.

The April 28 keynote speaker, Josh Linkner (pictured below), an “innovation expert,”  venture capitalist, and five-time tech entrepreneur, will discuss how organizations need to disrupt themselves and embrace change.

On April 29, Amelia Rose Earhart (pictured below), who is considered one of the youngest women to fly a single-engine plane around the world, will instruct attendees about how to develop a “flight plan” for success. She is also a television news reporter. She is, surprisingly, not related to the famed aviator whose name and passion for flight she shares.

Humorist and motivational speaker Joel Zeff will return as the Conclave emcee.

The AGS Conclave will be held April 27–29 at the Sheraton Denver Downtown Hotel. More information on the event, including registration, can be found here.