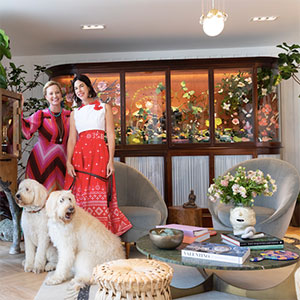 The jewelry retail industry continues to shrink, as traditional jewelry store closings escalate. Year to date, discontinuances are still down more than 20%, to 626 from 848, in the first three quarters last year, according to the Jewelers Board of Trade.

Meanwhile, a series of store openings from beloved contemporary brands has been infusing the industry with new life in 2019.

These mono-brand boutiques—many from brands moving in the direction of direct-to-consumer—are uniformly located in bigger U.S. cities, and appeal to young, stylish urbanites. And while these shops may not be moving Tiffany-level mounds of merch just yet, there are lessons to be learned from each of the brands mentioned below.

All five are doing a bang-up job of connecting to the next generation of jewelry buyers—chiefly by creating on-trend and in-demand styles, yes, but also by casting an aura of cool around their brands, in large part through social media. Their stores, by extension, feel like cool places to be.

Here are five new jewelry stores that have opened, or soon will open, in 2019—from a handful of jewelry’s current “it” brands.

Anna Sheffield, one of the industry’s most influential wedding jewelry designers, relocated her New York City flagship location to the NoHo neighborhood in early 2019, and closed her longtime store on Manhattan’s Lower East Side. After 10 years in the biz, the designer said wanted to be on a more foot-traffic-friendly shopping row.

French brand Messika opened its first-ever stand-alone U.S. shop in March in the Aventura Mall near Miami—bringing its low-key diamond jewelry to one of the United States’ most bling-friendly cities, in one of the highest performing malls in America.

Los Angeles–based jewelry designer Irene Neuwirth co-opened a store with Charlotte, N.C.–based luxury fashion retailer Capitol at the Brentwood Country Mart earlier this year. Neuwirth’s jewelry is a staple on Hollywood red carpets, and now she has a big, permanent case full of jewels on L.A.’s west side (she has a flagship closer to the east side).

The direct-to-consumer fine jewelry brand, which raised $13 million in Series A funding in June, opened two permanent stores in NYC last month that formerly housed AUrate pop-up shops. Both the SoHo space and Madison Avenue shop are in beta mode as the brand susses out what its customers like and don’t like in the retail environments.

NYC-based jewelry and lifestyle brand opened a store in Santa Monica, Calif., a couple of years back, but is currently in construction on a new store in L.A.’s downtown Arts District that will replace the Santa Monica location—and also offer experiential happenings such as meditation classes and musical performances.