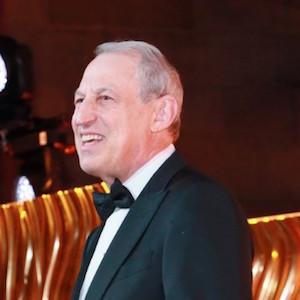 The cluster of events began on Friday with the Jewelers Vigilance Committee luncheon at the Pierre Hotel.

Susan Jacques, president and chief executive officer of the Gemological Institute of America, received the organization’s Stanley Schechter Award, given to people who advance industry ethics.

Jacques passed on some wisdom she had gleaned from Buffett, the chairman of Berkshire Hathaway, who Jacques worked for at Borsheims: “Never do anything in life if you would be ashamed of seeing it printed on the front page of your hometown newspaper for your family and friends to see.”

Ed Bridge (pictured at top), chairman emeritus of Ben Bridge Jeweler, won the Gem Award for Lifetime Achievement. He was introduced by his two children, Lisa, the current CEO of Ben Bridge, and Marc.

Lisa called her father an “industry icon and beloved leader.

“He was a man consumed by building his business for 40 years, who didn’t seem to sleep a night without dreaming about the company, who didn’t appear to have any discernible hobbies, who then willingly left his business, cold turkey, at the age of 63,” she said. “Ed’s unimpeachable moral code, and sense of honor and integrity, came from his father Bob: The way you do something is more important than the outcome.”

Marc called his father “deeply competitive, yet he wants everyone to win. He is a hard-boiled negotiator with a heart of gold.… We are deeply proud of you, and of what you have accomplished, and more importantly, of who you are.”

In his remarks, Ed Bridge, who retired last year, joked, “It’s not often that you get to watch your own eulogy.”

He shared some lessons that he received from the only three bosses he ever had: father Bob, his Uncle Herb, and Buffett. (Berkshire Hathaway has owned Ben Bridge since 2000.)

“The first is, treat people the way you would want to be treated, if your roles were reversed. The second is, always be honest in all of your dealings. The third, is be generous with your time and resources. They taught me about giving back, to build a stronger community and stronger industry. I hope I’ve done that.”

Also taking home Gem Awards were Nikos Koulis, head of Nikos Koulis Jewels, who won the award for jewelry design; Rachel Garrahan, jewelry and watch director for British Vogue, who nabbed the award for media excellence; and Twist, the Portland, Ore.–based store and site, which received the award for retail innovation.

On Saturday, the Jewelers’ Security Alliance held its annual luncheon at the New York Yacht Club. After the group’s president, John Kennedy, happily announced that there were no jeweler fatalities during industry-related crimes in 2019, JSA presented its 15th Annual Industry Service Award to Christina Hackler, the vice president of global asset protection for Signet Jewelers.

Kennedy noted that it is still relatively rare for women to be involved in loss prevention—and it was particularly “extraordinary” for Hackler to be holding the position that she does, one of the most important in the industry.

The weekend was capped by the industry’s glitziest event, the annual Saturday night banquet of the 24 Karat Club of the City New York, which was held this year at the Sheraton New York Times Square. (The event has traditionally taken place at the Waldorf Astoria, but has moved out during its remodeling. For the last two years, it’s been held at the New York Hilton Midtown.)

Calum Scott, who has scored a number of hit singles since he appeared in Britain’s Got Talent in 2015, was the night’s entertainment—a more modern pick than the group tends to select.