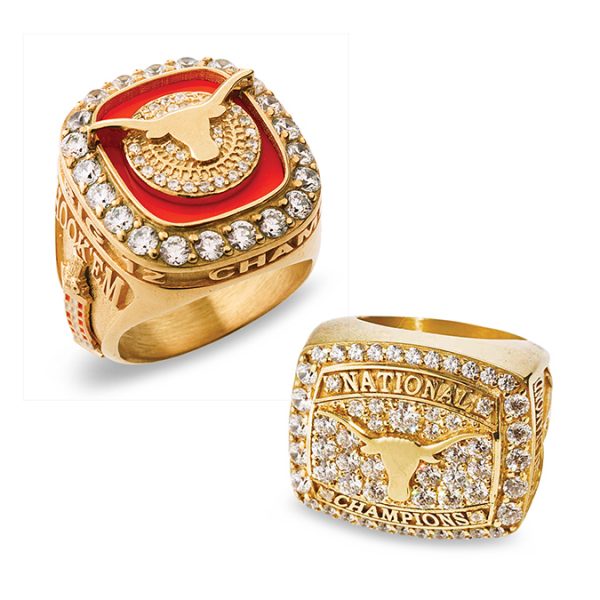 Rick Antona, the owner of Uptown Diamond in Houston, ­expects to see revenue double in the next year, and he attributes the spike to his role as the official jeweler for the University of Texas.

For the next five years, the store will design and craft championship rings, money clips, necklaces, cuff­links, and bracelets for all sports as well as the coveted T-Ring, awarded to every football letterman who graduates from UT.

The contract with the University of Texas is a big win for Uptown Diamond, but it’s not the only way for a jeweler to partner with a college or university. Jewelry stores are engaging with schools in a variety of programs because marketing to a collegiate audience continues to pay off.

Let’s start with Uptown Diamond. To secure the exclusive contract, the store—along with three others—prepared a ­request for proposal (RFP) for the athletic department, which assessed the bids to determine the best candidate.

Antona didn’t take the pitch lightly. In fact, he and his ­partner spent $10,000 and around four months putting ­together a professional presentation.

“We educated the university about the entire design and production process of crafting a championship ring and showed them how our rings were superior to our competitors’,” Antona says. “We were completely transparent.”

Once he’d delivered the bid, Antona and his team made an in-person presentation that included CAD/CAM design artwork, 3-D wax molds, a video, ring samples, and even the ring’s presentation box. He also discussed the history of Uptown Diamond and plans for the new manufacturing plant the store would build if it got the contract.

“We addressed all their issues,” he says. “We put on an ­incredible presentation, which allowed them to see the passion we have for this business.”

Uptown Diamond’s anticipated business bump will come not only from sports-related jewelry revenue but also from increased sales to both recent graduates seeking engagement rings and alumni buyers looking to show pride in their school.

Next, Uptown is moving forward with an exclusive contract with Texas A&M University. Antona put together the winning bid in the same way he approached the University of Texas proposal, he says, though it cost half as much this time around because he was experienced in the process. 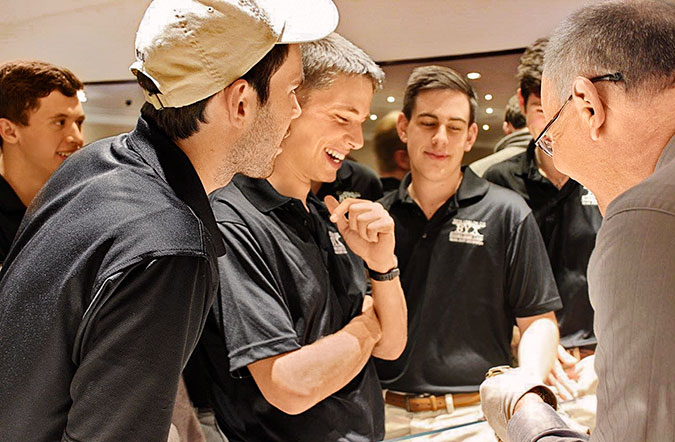 An A&M focus group at Gardner’s

David Gardner’s Jewelers and Gemologists in College Station, Texas, doesn’t have an exclusive agreement with Texas A&M and doesn’t make jewelry for the university, but it’s heavily invested in marketing via Aggie athletics and working with the students.

A decade ago, the jeweler began sponsoring a video feature at football games called “Ask the Aggies,” in which football players are asked amusing questions. The funniest segment is aired during the instant replays.

“It’s become such a tradition that most of the 100,000 people in the stadium stay in their seats at halftime, until they’ve watched ‘Ask the Aggies,’ ” says Julia Gardner, who owns the store with her husband, David. “We’ve become known for this.”

Gardner’s also features ribbon boards—moving ­horizontal digital advertisements—at each football game. “This gives us visibility with students and alumni,” Julia explains. “The student market is its own animal, and you have to reintroduce yourself every four years to a new group.”

Consistency is key when advertising at college athletic events, says John Torella, senior adviser with retail consulting firm J.C. Williams Group. “If you’re going to do [something like this] just once a year, forget it,” he says.

Beyond the games themselves, the Gardners work with Texas A&M in another way: They hold monthly in-store focus groups, designed to help guide Gardner’s engagement ring sales and marketing efforts. The groups typically have 25 to 30 people, mostly female students, Julia says. However, the store makes a concerted effort to gather groups of men—mostly juniors and seniors—twice a semester. While the sessions with the women are important (for feedback on the style and shape of rings they covet), the men’s participation is invaluable, she says, because they are usually the ones who buy the jewelry. 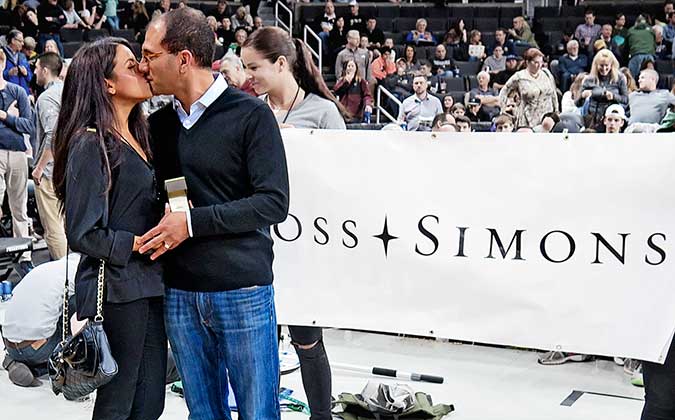 At basketball games at Providence College in Rhode Island, marketing for the Cranston, R.I.–based Ross-Simons comes down to a kiss. At a dozen events each year, the camera pans over the crowd, then stops on a couple for a kiss that is featured on the digital screen along with the Ross-Simons name.

Each kissing couple receives a “gift letter” for $200 to any of the company’s nine stores (including the Warwick flagship and eight other locations, which operate under the name Sidney Thomas). At the end of the season, the 12 couples are asked to come to center court at halftime and receive a box from Bob Simone, chief operating officer of Ross-Simons. Eleven boxes hold a cubic zirconia; one contains a diamond ring.

The store has been sponsoring the kiss for nine years. “It’s not necessarily about how much money you make off each person who gets a gift letter,” Simone says. “It’s that you’re getting your name in front of 10,000 people per game.”

The point of any kind of athletic sponsorship, especially a local one, is to engender goodwill and show you’re part of the community, says Michael Levin, associate professor of marketing at Otterbein University in Westerville, Ohio. “You’re also tapping into a base of identity attachment to a university—not just from people who went there but also the aspirational group, the people who support it athletically.” 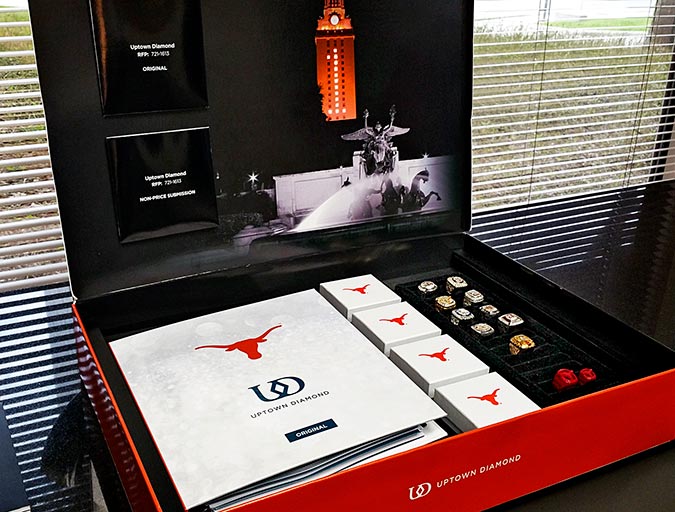 Sierra-West Jewelers in Orem, Utah, has been working with Brigham Young University’s athletic department for more than 25 years. “It’s a great way to get their brand in front of our students and our wealthy alumni,” says Jared Bell, general sales manager of BYU Athletics.

At football and basketball games, packets from Sierra-West are hidden under 80 seats; one contains a diamond. During a timeout, an announcement lets attendees know to check beneath their seats. The winner is revealed at the next game, and Sierra-West gets another mention.

The store also brands itself at alumni events and at the courtside seats reserved for the wealthiest attendees. For these, the retailer provides elegant marketing brochures.

Hamilton Jewelers in Princeton, N.J., runs a program with nearby Princeton University. The jeweler collaborates with the school’s human resources department to provide a selection of items—ranging from jewelry to timepieces—for associates to choose from when they are going to receive a gift through the university’s employee recognition program.

In addition, the retailer is a licensed provider to the school for many exclusive jewelry and home-accessory items (think tiger-themed tableware). “It’s brand equity to work with these elite pillars in our communities,” Bouchard explains.

If you’re preparing to pitch a university, be sure to heed this advice from Rick Antona of Uptown Diamond in Houston:

1 / Use video to bring your presentation alive. Antona included the University of Texas song, logo, and campus photos alongside information on Uptown Diamond and its products in his video presentation.

3 / Be transparent. “This makes the college feel they can completely trust you,” Antona says. “We gave a complete history of ourselves and answered every question.”

4 / Find out the college’s issues with past sponsors, such as delivery times and the quality of work, and make sure you detail a solution to each one in your presentation. Show how those issues won’t happen with you.

5 / Bring along jewelry samples so college representatives can see and touch them.