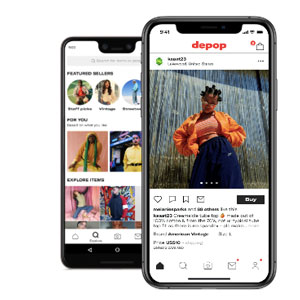 For young, tech-savvy fashion consumers, secondhand shopping is where it’s at.

The speedy growth of secondhand luxury fashion site The RealReal—which sends its sales emissaries into the closets of the affluent to excavate Valentino, Van Cleef, Vetements, and the like to sell on its popular site—was a bellwether.

But the kids now have their own platforms for nabbing, offloading, and showing off their of-the-moment looks.

Chief among those platforms is Depop, a highly social e-commerce app (that recently opened a couple of stores) where users buy and sell fashion and follow sellers and posters who’ve become legitimate fashion stars on the site. There’s even a signature Depop look—think ’90s, sporty, and casual—that’s known and name-checked in (very young) circles on social platforms. Read New York magazine’s excellent and comprehensive piece on Depop right here.

Just behind Depop is a growing cadre of secondhand fashion apps, including used handbag purveyor Vestiaire Collective and clothing swap Vinted. And eBay, grandmother of all secondhand e-comm sites, has become fertile hunting ground for sellers on these apps searching for merchandise that’s so bleeding-edge cool (like a tie-dyed tee with a cartoon character on it—yes, really), sellers are unaware a demand for the looks exist, so they price them for a pittance.

The secondhand fashion trend has so much cultural currency right now, in fact, that even the ka-ching Kardashians are cashing in. The famous reality TV family recently launched Kardashian Kloset to resell their clothes, jewelry, and accessories in flash-sale format. There is, of course, an Instagram page to go with it, where you can peruse items that will be featured in upcoming sales.

What’s behind the secondhand fashion craze? Well, everything is cyclical, and we’re currently on the opposite side of the circle from conspicuous consumption and $3,000 “it” bags. Add to that the fact that style-setters no longer rely on runways and magazines to tell them what’s in; they’re cogs in the Instagram style sphere, a global (but often homogenous) environment where everyday kids create and promulgate their own fashion fads.

But the major driver here is really the environment—and our collective understanding that it’s in serious peril. Fashion manufacturing—and fast fashion, in particular—has been an erosive player in the health of the planet for decades. According to data from The True Cost, we consume 80 billion pieces of clothing annually, and 11 million items of clothing end up in landfills every week.

Watchdog groups, celebrities and business leaders, and impassioned young environmental activists like Greta Thunberg are shining a light on the how global manufacturing is contributing to Earth’s temperature rising and the catastrophic weather patterns it creates. Young consumers are paying attention—and shopping accordingly.

Top: Screenshots of the Depop app (image courtesy of Depop)