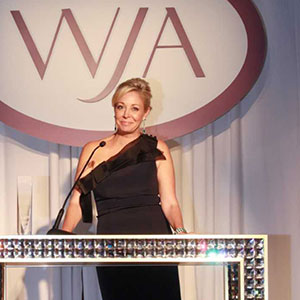 The Women’s Jewelry Association (WJA) toasted four industry leaders and one woman-promoting organization at its annual Awards for Excellence on July 16 at Pier 60 in New York City.

Breaking with prior custom, this year’s event didn’t honor women from a variety of categories but instead honored five visionaries “making a difference for women’s equality.”

The five honorees were Nadja Swarovski, a member of the executive board of Swarovski (pictured, right); Mercedes Abramo, president and CEO of Cartier North America; Caryl Capeci, president of Hearts On Fire; and De Beers and UN Women, jointly.

Swarovski was given a warm introduction by 96-year-old fashion legend Iris Apfel, who received a standing ovation in her own right. Apfel hailed Swarovski as ‘”one terrific dame” who “aside from being a terrific businesswoman, she’s a great human being.”

Accepting her award, Swarovski said that she was honored to be “recognized by these women who are fighting for real equality.”

Shelley Zalis, CEO of the Female Quotient, introduced Abramo, hailing her as a “fearless badass leader.”

“I am passionate about women’s equality,” Abramo said. “It’s something that is ingrained in our company’s DNA.”

Joanna Coles, chief content officer at Hearst Magazines, introduced Capeci, calling her someone who is never hesitant to give credit to her team.

“I never thought of myself as a visionary,” Capeci said. “But in an industry that is short of female leaders, I’ll take it.”

Capeci recalled her industry start at N.W. Ayer & Son with the De Beers account, which fostered “passion” for the jewelry business.

As a leader at Hearts On Fire, Capeci said she feels “a responsibility to support and nurture great talent” and create a supportive environment.

De Beers and UN Women, the United Nations entity dedicated to gender equality and the empowerment of women, received the joint award in recognition of De Beers’ commitment to increase the number of women in its ranks.

De Beers global head of corporate affairs David Prager said he recognized the “irony” of a man accepting the award, but said that De Beers’ partnership with UN Women has “united our team around a common goal.”

Bev Hori, who recently retired from the Gemological Institute of America and has worked at Jewelers of America, Ben Bridge, and the American Gem Society, was given the group’s second annual Cindy Edelstein Mentorship Award. She was introduced by last year’s recipient, Peggy Jo Donahue.

“I thank you all for the amazing ride I have had in this business,” Hori said.