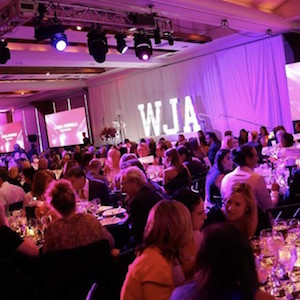 Pennelli said she was proud to accept her award on behalf of the Yurman family, “which loves and celebrates women.”

Volandes recalled in her speech that she was originally encouraged to cover jewelry when an editor told her, “You wear a lot of jewelry and you’re Greek. This could be a thing for you.”

Since then, her appreciation of the industry has deepened, she said.

“You have changed what was always a love for jewelry into something much more,” she said. “I’m proud to be part of this jewelry family. Thank you for letting me in from the beginning.”

WJA also bestowed its Cindy Edelstein Mentorship Award on Mark Hanna, chief marketing officer of the Richline Group. The award is given to people who give “their time and talent for the benefit of others without the expectation of personal or financial gain.”

Hanna said he had long been inspired by the women in his life, who always encouraged him to hold himself to high ideals.

“As you get closer to being a memory, you want to be a good one,” he said.

Tannenbaum was introduced by Susan Jacques, president and CEO of Gemological Institute of America (GIA). Tannenbaum is a member of the GIA board.

“I have always been inspired by his thoughtful leadership, creativity, and strategic thinking,” Jacques said. “He’s a quiet giant, more interested in listening than speaking.”

Accepting his award, Tannenbaum paid tribute to his father-in-law, Leo Schachter, who died in May. He remembered how his company’s namesake always had a “simple twinkle in his eye” when he talked to young people, because he believed in passing on his passion for his business to the next generation.

Introducing Capeci, Sarah Russell, secretary of the AGS Young Titleholders committee, said she considered Capeci a true mentor who has opened many doors for her and other young people in the industry.

Capeci said she considered herself “lucky, lucky, lucky” and that “I can’t remember a time when I didn’t love what I was doing.”

She hailed AGS for cultivating a new generation of industry leaders.

“We are so reluctant to hand over the reins to a new generation,” she said. “It needs to happen everywhere. We can truly learn from this generation.”

Zimmer was introduced via video by Ed Bridge, the former CEO of Ben Bridge, who called him a “true mensch and a great friend.”

Zimmer said his award was shared with the 800 members of the Reeds family. He also paid tribute to the vendors who stood by him when his company ran into trouble during the financial crisis.

“I still wake up every morning, and I can’t wait to get to work,” he said.