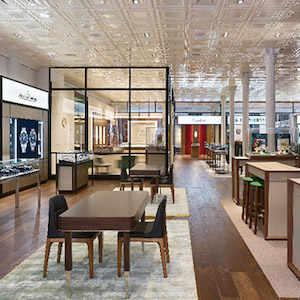 The Watches of Switzerland Group, which owns the Mayors chain as well as multibrand watch stores in the United States and United Kingdom, will file for an initial public offering on the London Stock Exchange sometime around May 22, according to reports.

In a statement, Brian Duffy, chief executive officer of Watches of Switzerland Group, said his company “is now the U.K.’s leading luxury watch retailer and has successfully entered the significant, but underdeveloped U.S. market.”

Formerly known as Aurum Holdings, the company owns the 15 Watches of Switzerland stores in the U.K., as well as Mappin & Webb and Goldsmiths, two U.K. jewelers that date back to the 1700s. The company has said it accounts for about half of all Rolex sales in the U.K.

In 2017, it paid $104.6 million to the Birks Group for U.S. chain Mayors Jewelers, which comprised 16 Mayors stores and one Rolex boutique.

Last year, it opened its first Watches of Switzerland store in the United States, in New York City’s SoHo neighborhood (pictured). This year, it opened a store at the Wynn Las Vegas and another one at the new Hudson Yards retail complex in New York City. Reports say that it will also open a boutique in the new Wynn retail complex planned in Boston.

The group intends to float 25 percent of its share capital and to raise £155 million (approx. $201 million). A further 15 percent may also be made available. Proceeds will go to reducing its £120 million of net debt. It also has indicated that it plans further expansion in the United States.

The company, which at one point in its history was owned by Signet, is currently majority owned by Apollo Global Management. Post-IPO, the U.S. private equity firm will reduce its ownership of the company, though it will still keep a controlling stake, according to Bloomberg.

(Image courtesy of Watches of Switzerland)