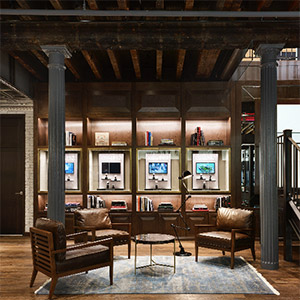 The U.K.’s largest luxury watch retailer has officially landed in the United States.

Multi-brand retailer Watches of Switzerland has debuted a flagship store at 60 Greene St. in Manhattan’s SoHo neighborhood. The opening is part of a strategic U.S. expansion plan for the company that kicked into high gear with its 2017 acquisition of American chain Mayors Jewelers.

The retail brand plans to open a flagship at the Wynn in Las Vegas next year, in addition to a second Manhattan location, in Hudson Yards, in March 2019. Following those openings, the brand will debut a store in the new American Dream Meadowlands shopping complex in East Rutherford, N.J.

Jointly designed by New York City’s MNA and CAPELO Design Ltd. in London, the two-story flagship has a lower level that’s been built out to resemble a decadent residential den—and presumably coax watch lovers into hanging out.

There’s also art! Watches of Switzerland has partnered with nonprofit arts foundation Aperture to curate a rotating exhibition of contemporary photography. The first installment includes photographs from Bill Armstrong, Michael Flomen, Eva-Fiore Kovacovsky, and Richard Misrach. All photographs are for sale, with proceeds benefiting the artists and Aperture.

But back to the watches. Alongside new Swiss timepieces are pre-owned watches—curated by vintage watch brand Analog/Shift. The initial selection of pre-owned watches includes classics from Rolex, Omega, and TAG Heuer.

The flagship plans to host pop-up events “every three to four months,” according to a company statement. Kicking off that program will be a Grand Seiko pop-up, set to open soon.

“Our Watches of Switzerland SoHo flagship is a special achievement for us on many levels,” Brian Duffy, CEO of Aurum Holdings/Watches of Switzerland Group, said in the same prepared statement. “This is an important first step in what promises to be an exciting journey as we expand into the U.S. market.”