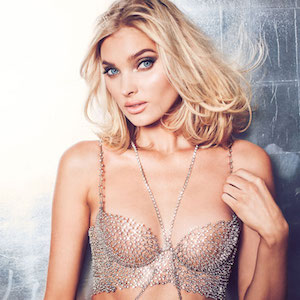 Jason Payne, the CEO of Ada Diamonds, which supplied lab-grown diamonds for a limited-edition Rolls-Royce, says that the lingerie company decided from the outset that it wanted to line this year’s bra with man-made stones, and it contacted his and several other lab-grown companies. Victoria’s Secret did not return several requests for comment.

Along with the lab-grown diamonds, the bra features what it calls “responsibly sourced topaz” that come from traceable sources in Brazil and Sri Lanka.

The bra features 2,100 created diamonds, weighing a total of 71.05 cts., including a pear-shape 2.03 ct. center stone. Its casing is sterling silver. The design took four craftsmen 930 hours to make, according to the statement from Atelier Swarovski.

The statement values the bra at $1 million, which may be seen a reflection of the lower price of lab-grown diamonds. Past bras have been valued at as much as $15 million.

In addition to working together on the bra, Victoria’s Secret is offering a version of the Fantasy Bra studded with Swarovski crystals at its stores through November.

Nadja Swarovski, member of the Swarovski executive board, said in a statement that she hopes the bra “provides a bold new vision of luxury— mixing glamour and innovative materials—when it hits the runway at this legendary show.”

“It feels like all the hard work that I’ve done has paid off, and this is gonna be an incredible moment in my life where, you know, I’ll remember this forever,” Hoek told ETonline.

For the last 11 years, diamonds for the Fantasy Bra have been supplied by Mouawad. In past years, it has been designed by Manhasset, N.Y., retailer London Jewelers and Italian designer Damiani.