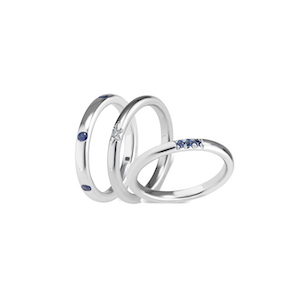 U.S.  platinum jewelry sales fell a staggering 40% in the second quarter of 2020, but now the people of Platinum Guild International are starting to see the market come back to life.

“The business was decimated in the second quarter,” says Kevin Reilly, the vice president of Platinum Guild International USA.

Still, he adds that even a 40% fall is “better than expected, considering that just about everybody was shut down.”

Reilly notes that since some of the COVID-19 restrictions have been eased, the business has shown signs of recovery, particularly in bridal. The report says that U.S. platinum jewelry sales surged 26% over the prior year in June, and Reilly has heard good things about demand in July.

“The feedback that we’ve received is people are optimistic,” he says. “They are starting to look at their business creatively and they are figuring out how to operate in the midst of these restrictions, how to embrace e-commerce, and reduce their aged inventory. It really felt like the industry has rallied and had done a great job of managing their business. The feedback that we have been hearing is the increase in platinum business was significant.”

He adds the bridal business “has really shot up again”—helped, no doubt, by the fact that platinum is now trading around at half the price of gold. (At publication time, platinum was trading at $902 an ounce, while gold was above $1,900.)

“Everybody was putting weddings on hold and their engagements on hold,” he says. “We are optimistic about the second half of the year.”

The report also noted that the jewelry business had largely recovered in post-COVID China, which it called an encouraging sign for the world as a whole.