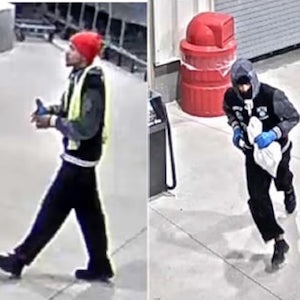 The sheriff’s office in Coweta County, Ga., is seeking a man who hid in a local Costco for five hours and then stole $13,000 in jewelry after it closed.

According to the sheriff’s office Facebook page and media reports, on Oct. 10 at 9:45 p.m., the suspect entered the Sharpsburg, Ga., Costco Warehouse Club and then hid behind a display sign. He stayed there after all the employees had left the building.

“It is a big store,” Sgt. Jae Robertson told local station WSB, “and he found a spot in the store where he could conceal himself.”

At around 12:02 a.m., he emerged, clad in a black ski mask and gloves, and smashed the glass jewelry case with what was described as a “blunt object.” He eventually got away with $13,000 in jewels before a four-door passenger car picked him up.

Investigators have discovered video footage that they believe shows that the man was at the store the day before, examining the jewelry display case, according to The Newnan Times-Herald.

John Kennedy, president of the Jewelers’ Security Alliance, says that these kind of thefts, called “lock-ins,” are unusual, though they are not unheard of. (It’s not even the first time one has happened at a Costco.) They typically happen at department stores, he says. It’s also possible that a smaller jeweler could be targeted by such a theft, he adds, and recommends retailers check their bathrooms before they leave at night.

While Costco isn’t known as a high-end store, it does occasionally sell valuable jewelry, including a $400,000 diamond this spring and a $220,000 ring more recently.

More surveillance video can be seen in this story:

Anyone with information about the theft is urged to contact Robertson at 678-223-6735 or jrobertson@coweta.ga.us.

Other crime prevention tips for jewelers can be seen here.