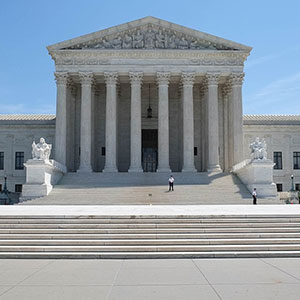 E-tailers can now be required to collect sales taxes from consumers, even in states where they don’t have a physical presence, the Supreme Court ruled in a historic decision today.

The 5-4 ruling overturns the court’s 1992 decision, Quill Corp. v. North Dakota, which prohibited states from collecting taxes from sellers that do not have an in-state physical presence. Under the old ruling, if an e-tailer was based in New York, it would have to charge New York customers sales tax, but not necessarily customers in any other state. Now, any state can require a seller to collect sales tax.

The court’s decision came in response to South Dakota v. Wayfair, a 2017 case. South Dakota had passed a law requiring online merchants with more than $100,000 in annual sales or 200 transactions to state residents to collect sales tax. The South Dakota Supreme Court found the law unconstitutional, citing Quill. The state appealed, and the U.S. Supreme Court agreed to hear the matter in January.

Speaking for the majority, Justice Anthony Kennedy argued that, by requiring a physical presence, the current system will “embroil courts in technical and arbitrary disputes about what counts as physical presence.”

He also said it hurts the states’ ability to raise revenues.

“In 1992, it was estimated that the States were losing between $694 million and $3 billion per year in sales tax revenues as a result of the physical presence rule,” he said. “Now estimates range from $8 billion to $33 billion.”

In his dissent, Chief Justice John Roberts argued that requiring sales tax collection could be a big burden.

“Correctly calculating and remitting sales taxes on all e-commerce sales will likely prove baffling for many retailers,” he wrote. “Over 10,000 jurisdictions levy sales taxes, each with [different rules].”

The biggest e-tailer in America, Amazon, currently collects sales tax in the 45 states that charge sales tax, though it does not collect taxes on items sold by third-party sellers.

Blue Nile did not respond to a request for comment on how the ruling would affect its business. David Bouffard, a spokesperson for Signet, owner of James Allen, said, “Signet has been a proponent of the Marketplace Fairness Act for years, collecting sales tax at both our store and branded e-commerce businesses accordingly. This ruling would expand sales tax collection to include all our online brands.”

Jewelers of America (JA), which has long advocated for so-called sales tax fairness, applauded the ruling.

“This historic decision from the Court in support of sales tax fairness is a major victory for the jewelry industry, providing a clear path to level the playing field between traditional and online retailers,” said president and CEO David Bonaparte in a statement. “Now Congress must respond by passing federal legislation to create a universal federal framework for sales and use tax collection in a way that benefits businesses regardless of the state where their business resides and avoids a patchwork of state-by-state laws.”

Earlier this year, JA and its members were featured in two amicus curiae briefs that were submitted to the Supreme Court, arguing for Quill to be overturned.

The Jewelers Vigilance Committee sent out a note reminding members that “internet retailers who make sales in states where they have no physical location should now check for state laws that require them to collect sales tax for those states.”

[Disclosure: The author’s wife works for Jewelers of America.]