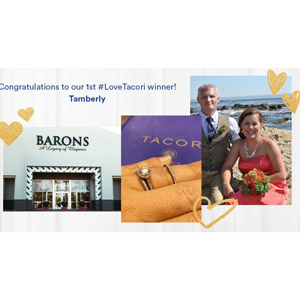 Los Angeles–based jeweler Tacori has announced the first winner in its Love Tacori contest, a campaign the brand announced back in May. To enter, the jeweler is asking its fans to visit one of its retail partners to try on Tacori jewelry and share their look on Instagram (you can see the official rules here).

The first winner (there will be five in total) is Tamberly Stone, who entered the contest while on a weekend getaway in California with her husband. She tried on Tacori’s new selection of anniversary bands at Barons in Dublin, Calif., a Tacori Diamond-level partner. Stone will be awarded $20,000 in Tacori jewelry.

“I can’t believe it! My husband and I stopped by Barons on our first overnight trip since before our son was born—he is three. Those 28 hours away together were magical and refreshing,” said Stone in a statement. “Little did I know just how magical trying on anniversary bands would be!”

Four more winners will be announced—one each month—through the end of 2019. For rules and restrictions, visit tacori.com.