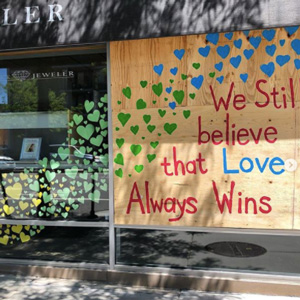 The protests that been taking place around the country following the murder of Minneapolis man George Floyd while in police custody have drawn thousands of peaceful protestors for 10 consecutive nights.

But the large and loose gatherings have also lured looters and other individuals bent on exploiting the (largely) controlled chaos for personal profit. These opportunists have left a devastating trail of smashed windows and inventory losses stretching from Santa Monica to Madison Avenue.

Large retailers can recover more easily from the damage and merchandise loss they’ve been incurring. The work of rehabbing the Target store that was looted during the initial Minneapolis protests, for example, won’t affect the corporation’s financial trajectory. Even Macy’s, an embattled large retailer if there ever was one, said it’s not overly concerned about the damage looters did to its historic Herald Square store in midtown Manhattan this week.

But for many small retailers who’ve been struggling to simply survive during the COVID-19 lockdowns, the effects of looting can be ruinous (read this report from JCK’s Amy Elliott on jewelers who have been victimized by looters).

And for many it’s been difficult to disentangle the two groups, both mentally and emotionally.

But experts in the realms of sociology, cultural studies, and law enforcement say the two are distinct. “I’ve never seen somebody come in who’s peaceful and then it’s like, Hey, they just broke that window over there. I’m going to now start looting,” sociologist and protest expert Dana Fisher told the Atlantic this week.

Nancy and Mark Schneider, the married co-owners of Mark Schneider Design in Long Beach, Calif., were at home Sunday night when their store was violently invaded and looted during a protest; they watched it happen on their alarm system phone app, helpless to stop it.

But Nancy contends, “I don’t think this had anything to do with the protests or the march. The demonstrators are all peaceful—these [criminal] guys come when they know there will be a protest and ride the coattails of peaceful demonstrators.”

The couple’s store is on the second floor of a building, and the looters used a crowbar to break through the heavy front metal gate on the facade. “This was planned,” adds Nancy. “Protestors don’t walk around with crowbars.”

And the horrific incident had a silver lining: “The whole jewelry community, the whole Long Beach community, the whole design community—there’s been an incredible amount of love and support that’s come our way,” Nancy says. “And it’s so much more overwhelming than the devastation of knowing someone has invaded your property.”

Looting, which has a long history in the United States, is a knotty issue. On the surface, it’s naked destruction and theft. But some who support Black Lives Matter and adjacent anti-racism movements right now consider it a relatively small price to pay for the chance to enact sweeping, permanent social changes in America.

Designer Marc Jacobs is one of them. After his Melrose Place store in Los Angeles was looted Sunday, Jacobs posted an image of his store’s sign with his logo crossed out and the names Sandra Bland and George Floyd written on them. And in another post, he shared, “Never let them convince you that broken glass or property is violence. Hunger is violence. Homelessness is violence…Racism is violence. White Supremacy is violence…Property can be replaced, human lives cannot.”

Chicago streetwear designer Don C ran through the gamut of emotions on Instagram after his store was looted in his home city. He wondered in a since-deleted post whether the looters “think they are doing the right thing by risking their lives stealing from me???” Then, minutes later, he became self-reflective: “I post material things that influence these undeveloped brains to covet, and this is wrong… I need to post content that promotes love, empathy, wisdom, understanding, honor, respect.”

Chicago store Steve Quick Jeweler, which didn’t return a request for comment, had part of its glass facade shattered during a protest. In the aftermath, the retailer painted hearts and a powerful message—”We still believe that love always wins”—on the plywood boarding up the store (see it at top).

Wilmington, Del., jewelry store A.R. Morris also had its front window smashed, but viewed the destruction as secondary to the larger movement of equality and justice for people of color, stating in an Instagram post, “Let us acknowledge the pain so many of us are feeling….Shattered glass is easy to fix; shattered communities take more time.”

Editor’s Note: The headline of this story has been updated since its publication.

Top photo: The boarded-up facade of Steve Quick Jeweler in Chicago (via @stevequickjeweler)