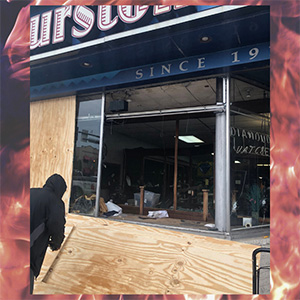 Retail jewelers in Minneapolis, and across the country, have faced looting and destruction of property due to protests spurred by the death of George Floyd.

Last week, just as jewelers in Minneapolis and St. Paul, Minn., were beginning to reopen their doors following the COVID-19 shutdown, 46-year-old Floyd was killed while in police custody on Memorial Day. The incident drove many Twin Cities residents into a state of grief and dismay, and thousands took to the streets in protest.

But by Wednesday night, the protests had turned violent—there were incidents of  arson, police sprayed tear gas, guns were fired, and many stores and businesses were looted and vandalized. And in the days that followed, culminating over the weekend, jewelry stores in other metro areas would experience a version of the same citywide destruction.

Thurston Jewelers, on Minneapolis’ Lake Street, a well-known hub of local commerce in the city’s Uptown neighborhood, was among the first stores to be looted. The owner did not respond to JCK’s request for comment, but according to one report, looters shot their way into the store and smashed and emptied the cases, resulting in several hundreds of dollars’ worth of theft and damage. JCK has confirmed that an on-duty security guard was also shot during the incident.

The Edina, Minn., location of R.F. Moeller Jeweler was robbed at around 3 a.m. on Thursday. The windows and doors were smashed and damaged, and the store was robbed of everything on the floor, according to Bob Moeller, company president. Fortunately, the majority of valuable goods were stashed in the store’s vault.

As his Edina store was being boarded up on Thursday, Moeller was in his St. Paul store location at around 3 p.m. when he received a text from a beat cop that the rioters were making their way to St. Paul.

“There were about 10 or 12 of us in the store, and we rushed to take everything and put it in the vault,” says Moeller. “At 4 p.m. we were just about to leave when someone threw a rock through the window, so we locked up and left through the back door.”

That night, neighbors, and armed security guards employed by the store formed a barricade as contractors worked to board up the windows as a protective security measure. The work was done at 12:30 a.m. on Friday.

“Then we heard gunshots and within five minutes, [the looters] had busted through with sledgehammers,” says Moeller. “But we were thankful that they didn’t cause more damage or burn the place overnight.”

When he returned to the scene on Friday, Moeller says he arranged for all of his stores’ goods and customer jobs to be moved via armed courier to another state. “I have no idea when we’re going to reopen,” he says. “I don’t know when I’m going to take the boards down, we are taking it day to day,” says Moeller.

Ryan Gilmore, owner of MSP Jewelers in Minneapolis’s Uptown neighborhood, tells JCK, “We are a progressive city, we love our city, and I totally get why [the protests] happened, but hopefully it’s not one step forward, two steps back. The people that loot tarnish the message—that’s what kills me.”

As of Sunday, his store had been robbed, or broken into, every single night since Wednesday and he estimates they’ve lost between $60,000 and $80,000 of inventory. Security footage shows that 30 different groups have broken into the store.

“The alarm was calling me every 10 minutes, but I just stopped answering it,” says Gilmore. “There’s not a cop in sight. They told us the first night, ‘People are dying, the city is burning,’ and they had to leave.”

“I think the only reason why they didn’t burn us down is because they keep trying to get into the safe,” says Gilmore’s business partner, Tony Schaefer.

Schaefer says he doesn’t want to go in and remove the safe because it’s still an active crime scene (and Gilmore acknowledged that it doesn’t contain anything of significant value—the big-ticket items were taken to a secure location during the COVID-19 shutdown).

“Minneapolis looks like a war zone,” says Schaefer. ” You can feel it in the air. I have so many mixed emotions., but I’m not worried about the store, I am worried about lives and our city burning down.”

Through news reports and the private Jewelers Helping Jewelers Facebook group, JCK has learned of more Twin Cities jewelers who’ve faced looting and vandalism, including Cadillac Pawn on Lake Street, where an alleged intruder was shot and killed; Uptown Pawn; and Buchkosky Jewelers at the Rosedale Center mall in Roseville, Minn.

Downtown Chicago and its various neighborhoods were described as a “war zone,” by some jewelers on Facebook, with a number of retail stores targeted for looting and destruction, including storefronts on Wabash Avenue’s Jewelers Row, such as Windy City Diamonds.

Ben Bridge Jeweler was hit at multiple locations. “We are closely monitoring and will be assessing the damage,” said the company’s vice president of marketing Stacy Speicher in a statement. “Most importantly, all of our associates are safe.”

Marshall Pierce, Rolex, and Tiffany & Co. on Michigan Avenue were also among the targets, as was Razny Jewelers on nearby Oak Street. JCK also received reports of theft and destruction at Preciosa Jewelry, Diamonds Inc., and Soto’s Jewelry in Rockford, Ill.

Steve Quick Jeweler, based in Chicago’s Lincoln Park area, was hit by looters around 2:30 a.m. Sunday. “The vaults are fine, but they broke multiple windows and ransacked the store,” says store president Melissa Quick.

As of this writing, other jewelry stores have reported smashed windows, vandalized property, and looting in and around Atlanta; the jewelry district in downtown Los Angeles; Dallas; Louisville, Ky. (see photo below); Columbus, Ohio; and Portland, Ore.

Jewelers with concerns about protecting their property during this turbulent time should consult this bulletin posted by the Jewelers’ Security Alliance.

Top: Jewelry stores on Minneapolis’ Lake Street were among the first businesses vandalized and looted after the George Floyd murder protests turned into riots. Many buildings, including the nearby 3rd Precinct, were burned to the ground (photo via @KateRaddatz).