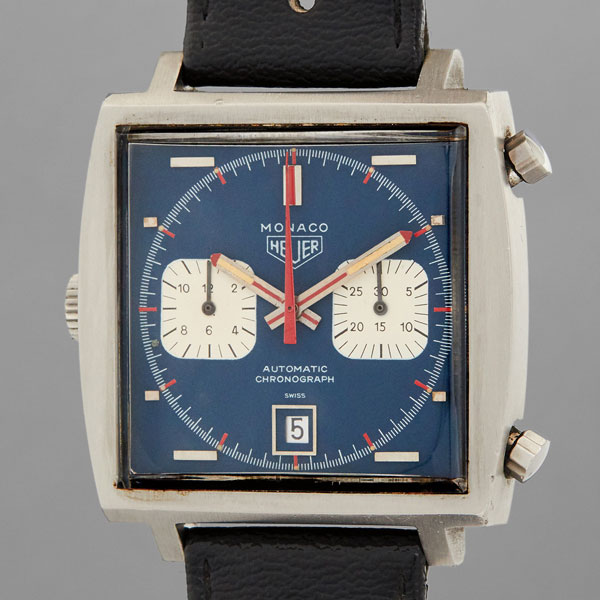 Paul Newman’s Rolex “Big Red” Daytona, given to him by his wife, Joanne Woodward, sold for $5.5 million at the Dec. 12 auction in London. A collection of four Richard Mille watches and one Panerai, all owned by actor Sylvester Stallone, net a collective $3.1 million. And, perhaps most notably, a Heuer Monaco owned (and then gifted) by Steve McQueen set a world-record selling price for any Heuer watch when it sold for $2.2 million.

The Heuer Monaco reference 1133 was worn by McQueen in the racing film Le Mans; after filming ended, the actor gifted the wristwatch to his personal mechanic, Haig Alltounian. Its final price was 10 times its original estimate, and more than double the previous record price set for a Heuer timepiece at auction.

If the brand name sounds familiar, Heuer is the previous iteration of TAG Heuer, founded in 1860 by watchmaker Edouard Heuer in St.-Imier, Switzerland. In 1985, the company was acquired by TAG Group. (LVMH bought nearly 100% of TAG Heuer in 1999.)

The Monaco was one of the first self-winding chronograph wristwatches, and was also the world’s first water resistant square-cased watch, according to Phillips. Designed by Jack Heuer, it was named for the Formula One racetrack Circuit de Monaco, in Monte Carlo, Monaco.

Paul Newman’s Rolex “Big Red” Daytona sold for $5,475,000 to an anonymous private collector, marking the third highest price ever paid for a Rolex watch at auction. The highest price paid for a Rolex, or any watch for that matter, was for another timepiece that once belonged to Newman—the actor’s personal Rolex Daytona, which sold for $17.8 million in 2017.

Consigned by Newman’s daughter Clea Newman Soderlund, “Big Red” was given to the iconic actor by his wife, who had a message engraved into its caseback: “Drive slowly Joanne”—a reminder to her husband to keep his cool while racing cars, one of his lifelong passions.

“He wore the watch nearly every day until he gave it to me,” Newman Soderlund is quoted as saying in the lot’s notes. “It has been a treasure of mine for almost 13 years. To me, this watch shows my mother’s tolerance of [my father’s] continued passion for racing and reflects the enduring love between them, which remained for another 25 years until his passing.”

Another high seller—the Panerai Luminor watch that Stallone wore throughout the filming of the movie Daylight—earned $214,200. And one of Stallone’s personal Richard Mille watches, the reference RM52-01 (see above), fetched a huge price: $998,000.

Would-be buyers from roughly 60 countries bid on the sale’s lots both online and over the phone, proving that “the market for watches has never been stronger,” noted Phillips’ senior consultant Aurel Bacs in a press release.

That’s clear enough. Phillips—along with Sotheby’s, Christie’s, and many other auction firms—has had a banner year in 2020, raking in an annual total of over $133 million.

Top: The Heuer reference 1133 that Steve McQueen wore in Le Mans sold for $2.2 million (all photos courtesy of Phillips)