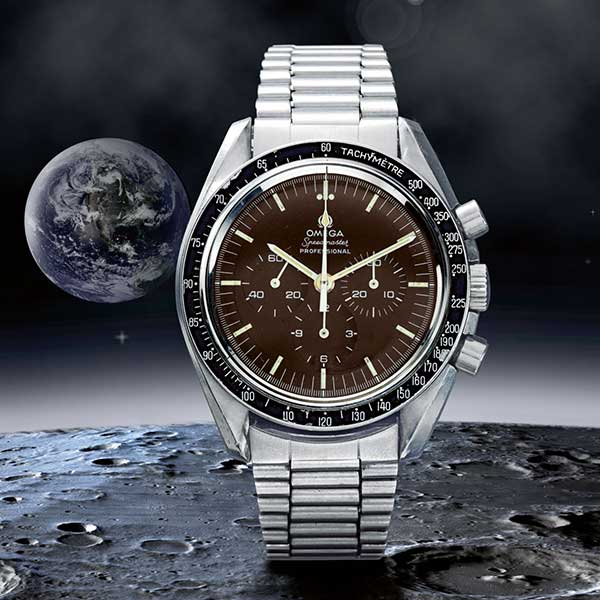 Saturday, July 20, marks the 50th anniversary of the Apollo 11 moon landing, but tributes to the milestone are already underway. We recently covered watch brand Omega’s launch of a new Speedmaster Moonwatch in collaboration with the Metropolitan Museum of Art. As JCK‘s Emili Vesilind notes, “The watch was official NASA-issue in the 1960s, and NASA’s original astronauts all wore Omega Speedmasters to the moon in 1969.”

Purist watch collectors, however, may be more turned on by Omega Speedmaster: To the Moon and Back, an auction taking place on Friday at Sotheby’s. The commemorative sale is dedicated entirely to a curated selection of 50 “Moonwatches,” which will have the additional distinction of being vetted by Omega itself.

Other highlights include the Apollo XI 1969 (Ref.: 145.022-69 ), which was produced in a series limited to 1,014 pieces and specially created to commemorate the successful Apollo 11 moon landing. Number 1 was presented to President Richard Nixon, and number 2 was gifted to Vice President Spiro Agnew. Thirty-four pieces were given to astronauts, including Walter Schirra (no. 9), Ed White (no. 10), Neil Armstrong (no. 17), and Buzz Aldrin (no. 21).

There are also a couple of digital Omega Speedmasters that have a novel quality, including Ref.: 186.004 from 1979, a prototype version of the 186.0004. NASA astronauts received these digital Speedmasters for the Omega Alaska project, the company’s testing ground for watches. These prototypes differ from production versions in several aspects: a thicker case to fit a tritium tube lighting system for the dial, and the word Light on the dial is absent.

Top: The Omega Speedmaster Tropical chronograph (Ref.: 145.022-69) from 1970 is among the 50 Omega Speedmasters offered at Sotheby’s July 19 auction commemorating the 50th anniversary of the lunar landing. According to the auction catalog: “In the collector community…’aged’ dials are referred to as ‘tropical.’ Some dials that were made throughout the 1950s and 1960s were outsourced to the sub-contractor Singer—known for producing dials for a number of Switzerland’s most prestigious brands. These dials usually become more discolored over time, and are highly sought after today.”