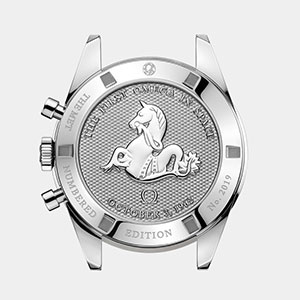 Omega has partnered with the Metropolitan Museum of Art to debut a new Speedmaster Moonwatch that toasts the 50th anniversary of the Apollo 11 moon landing.

The iconic watchmaker is sponsoring the Met exhibition, “Apollo’s Muse: The Moon in the Age of Photography,” running July 3–Sept. 22 at the museum. Which makes the $5,200 special-edition watch, officially called the Speedmaster First Omega in Space: the Met Edition, one of the swankier pieces of exhibit-related merch we’ve seen.

Omega’s history with American space exploration is long and illustrious. The watch was official NASA-issue in the 1960s, and NASA’s original astronauts all wore Omega Speedmasters to the moon in 1969. The “Apollo’s Muse” show features more than 170 photographs of the moon, from the dawn of photography to the present day, in addition to related drawings, prints, paintings, films, astronomical instruments, and cameras used by Apollo 11 astronauts.

Prior to the exhibit opening, Omega unveiled the new Speedmaster Moonwatch, a numbered-edition timepiece that boasts a 39.7 mm case in stainless steel with a black anodized aluminum bezel and black varnished dial. Inside is the Omega calibre 1861, a “descendent of the famous manual-winding movement that NASA’s Apollo astronauts trusted on the moon,” according to a prepared statement from Omega on the release.

The watch is presented with a red-and-white striped NATO strap (an ode to the Met’s signature color), with the Met’s logo engraved on the loop. The same logo is also engraved on the caseback, along with Omega’s legendary seahorse medallion.

The box it comes in is emblazoned with the Met logo and holds a second all-leather brown watch strap. It’s being sold exclusively at the Omega boutique on Fifth Avenue in New York City, as well as at the Met Store and online at store.metmuseum.org.

Top: The Omega seahorse medallion graces the caseback of the First Omega in Space: the Met Edition (all images courtesy of Omega).