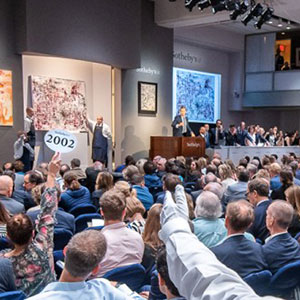 After 31 years as a public company, Sotheby’s is going private in a $3.7 billion deal and will be owned by media and telecom entrepreneur Patrick Drahi (pictured below).

The deal—which comes only a few months after the company’s 275th anniversary in March—calls for BidFair USA, an entity wholly owned by Drahi, to pay $57 to Sotheby’s common stockholders. That represents a 61 percent premium to Sotheby’s closing price on June 14. The deal has already been approved by the company’s board.

Drahi, a French-Israeli businessman who is also an art collector, owns a variety of telecom and media companies. In 2015, he bought Cablevision, and rebranded that company, as well as internet service provider Optimum, as Altice USA. Sotheby’s chief executive officer Tad Smith was the former president of Cablevision.

The transaction is expected to close in the fourth quarter, pending shareholder approval.

Smith, who was installed as CEO following a proxy battle with activist shareholders, said in a statement, “This acquisition will provide Sotheby’s with the opportunity to accelerate the successful program of growth initiatives of the past several years in a more flexible private environment.”

Added Drahi in the same statement: “As a longtime client and lifetime admirer of the company, I am acquiring Sotheby’s together with my family. “

In 2018, Sotheby’s sold $414 million in jewelry worldwide, as well as $88.5 million in watches. Notable sales last year included the record-setting auction of Marie Antoinette’s jewels; the sale of the Farnese Blue, a royal-pedigreed blue that nabbed $6.7 million in May; and a diamond engagement ring from the collection of Barbara Sinatra. A 10.62 ct. blue offered in December didn’t sell.

Founded in 1744, Sotheby’s was, until now, considered the oldest company listed on the New York Stock Exchange.