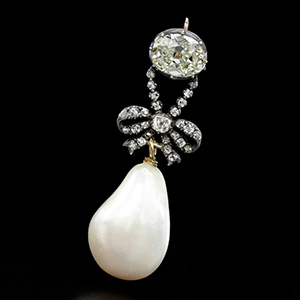 Selling Marie Antoinette’s jewelry was a piece of cake.

On Nov. 14, the Sotheby’s auction of jewels from the Bourbon Parma family garnered $53.1 million, more than seven times its original $7 million estimate. All 100 lots offered were sold, making it a rare white-glove sale.

The auction also set a record for a royal jewelry sale, eclipsing the $50.3 million benchmark set by the Duchess of Windsor auction in 1987.

The star of the show, a natural pearl and diamond pendant from Marie Antoinette’s personal collection (pictured above), sold for an amazing $36.1 million, establishing a new auction record for a natural pearl. That’s more than 15 times its original estimate of $1 million–$2 million. The buyer was listed as a “European private.”

The sale saw fevered bidding for all 10 pieces once owned by the doomed French queen, whose love of baubles fueled her unpopularity among her country’s poor. Together, the 10 pieces realized $42.7 million, again trouncing Sotheby’s presale estimate of $1.6 million–$2.9 million.

One of the most historically significant items, a monogrammed diamond ring bearing the initials “MA” and containing a lock of Marie Antoinette’s hair, fetched 40 times its estimate to sell for $443,786.

It likely helped that the jewels have quite a story, beyond being owned by a legendary, if somewhat infamous, historical figure. Before being taken into captivity, Marie Antoinette carefully wrapped her pearls, diamonds, and rubies in cotton and placed them in a wooden chest, which was sent to Brussels and then Vienna, to be kept by her nephew, the Austrian emperor.

When Marie Antoinette’s daughter, Madame Royale, was released from captivity in 1795, the jewels were then passed on her. They stayed in the Bourbon Parma family for the next 200 years.

“Tonight, we saw the Marie Antoinette factor work its magic,” said Daniela Mascetti, Sotheby’s jewelry chairman for Europe, in a statement. “No other queen is more famous for her love of jewels, and her personal treasures, pearls, and diamonds that survived intact the tumults of history, captivated the interest of collectors around the world.”

Participants from 43 countries took part in the sale, with 55 percent of registrants participating online.