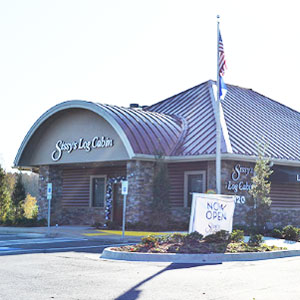 Sissy’s Log Cabin, the Arkansas-based jewelry retailer founded by Sissy Jones in 1970, has opened its fifth location—in Conway, Ark. The company broke ground on the store, which was built in the log cabin style as an homage to Sissy’s Log Cabin flagship store in Pine Bluff, Ark., in April.

The family-owned business began as a single retail location tucked inside a charming but termite-riddled rural log cabin. Since then, it’s blossomed into the largest independent fine jewelry store in Arkansas—boasting more than 100 employees in four locations in Arkansas, and one in Memphis, Tenn. The company is poised to celebrate 50 years in business in 2020.

“It’s so special to see our family grow into new locations, like Conway,” Sissy Jones said in a company statement. “I never imagined my little log cabin would continue to grow, but we are thrilled to be part of this community.”

The expansion into Conway was a strategic business decision, said CEO Bill Jones, Sissy’s son, in the same statement: “Conway is the perfect place for our fifth location. This thriving community has already welcomed us so warmly, and we are honored to become part of their family and make Conway a part of ours.”

The new location (at 820 Elsinger Blvd. at the Conway Commons) only looks rustic—it’s actually a tech-ified retail environment. And the shop’s opening brings Arkansas its only Breitling watch boutique.

Bill Jones told this reporter in 2015 that the secret to the family’s success is its one-of-a-kind founder and matriarch: “She’s one of the greatest salespeople in the world, and she has so much love and kindness in her,” he says. “There is no one in the world like Sissy Jones.”