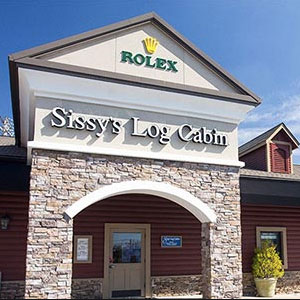 Sissy’s Log Cabin, the Arkansas-based fine jewelry chain, broke ground today on its second-ever freestanding location, in Conway, Ark. The store will be the fifth location for the nearly 50-year-old retailer.

The shop will be built in the log cabin style as an homage to Sissy’s Log Cabin flagship in Pine Bluff, Ark. Inside, however, the retailer plans to implement state-of-the-art technology, according to a company statement.

The company is partnering with Baldwin & Shell Construction to build the new store, which was designed by Reed Architectural Firm. The Conway location is expected to open this September.

“With Sissy’s rapid growth over the last few years, we felt the timing was right to bring our family-owned business to Conway,” said Bill Jones, CEO of Sissy’s Log Cabin, in the same statement. “We’re excited to continue the expansion of our renowned service, selection and experience across Arkansas.”

Sissy’s Log Cabin was founded in 1970 by Sissy Jones (see her in the photo above) and is now the largest independently owned jewelry chain in Arkansas. It remains a family-owned and -operated jewelry store with locations in in Pine Bluff, Little Rock, and Jonesboro, Ark., and in Memphis, Tenn.

Sissy’s first store was inside a tiny log cabin infamously riddled with termites. Sissy’s son Bill told JCK in 2015 that the secret to the family’s success is its one-of-a-kind matriarch: “She’s one of the greatest salespeople in the world, and she has so much love and kindness in her,” he says. “There is no one in the world like Sissy Jones.”