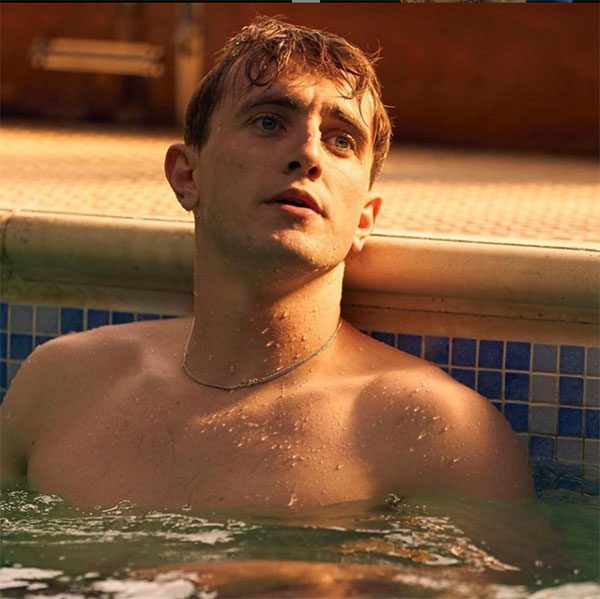 And the chain belongs to a character in Hulu’s Normal People—Connell Waldron, the hunky football player–turned–Trinity College-star–literature scholar.

I found the series, which chronicles the entrancing relationship between Connell (played by actor Paul Mescal) and Marianne Sheridan (played by Daisy Edgar-Jones), two Irish teenagers from different economic classes and, initially, at opposite ends of the social hierarchy upheld by their high school, a riveting mid-pandemic, pre–George Floyd tragedy distraction.

(For another mental escape, equally equipped to help you willfully block out all things horrible, see JCK’s Brittany Siminitz’s praise for Hulu’s The Great).

The silver chain, which British Vogue has called the show’s “most erotically charged prop” is something Connell wears in every episode. Jewelry people will find its constant presence distracting—but further evidence of men’s jewelry going mainstream. (And JCK has been tracking that men’s chain trend since last summer, when Jake Gyllenhaal wore one at a Spider-Man: Far From Home event.)

So as I watched the super-sexy narrative of Normal People unfold, I had no choice but to give “Connell’s chain” a Goog and basically hit the jackpot when I landed on @connellschain. The fan-powered Instagram account has 181,000 followers to date.

Normal People is based on the best-selling novel by Sally Rooney, published in 2018. Several articles have been written about the show’s fashion, most focusing on the chain itself. As for its significance, costume designer Lorna Marie Mugan told Bustle, “In the novel, Marianne notices [the chain necklace] on Connell as something he has had since school days and Peggy notes that it is ‘argos chic.’ It speaks of class and Connell’s place in the world. Class and power are big themes throughout the story.”

About that “Argos chic:” I thought it might be a reference to the Odysseus’ loyal dog in “The Odyssey” (Marianne and Connell run with a very brainy crowd). But I have since been alerted to the fact that Argos is a U.K. chain store, a bit like Target or Walmart. So in this context, Connell’s chain is seen as something working class and basic.

Even so—and I don’t want to drop any spoilers—but my detecting a literary allusion here has some validity when you consider how Marianne and Connell first get together and keep coming back to each other.

I also think Connell’s chain is there to mark him as more than a jock, someone with sensitivity and fragility—the slender chain on his muscular neck is a compelling juxtaposition. And when both end up at Trinity, Marianne changes up and experiments with her style, whereas Connell’s look is largely unchanged. The chain is there as a constant reminder of who he is and perhaps of the cruelty he shows Marianne when they first start hooking up.

As for Mugan’s reference to class, we know that jewelry has historically been a marker of status and power, with monarchs and aristocrats wearing badges and medallions to telegraph their place in society. I think there’s some of this going on with Connell’s chain—in high school, he is part of the ruling class, and despite Marianne’s posh family background, she is a social outcast. And she must subjugate herself to her lover, a pattern she repeats with other men, but I digress….

The kicker (and a reason to fall madly in love with Mescal): The actor recently partnered with Pieta House, a charity that provides support to people who are suicidal or engaging in self-harm, to raffle one of his personal chains (a 14k white gold sports chain by jewelry designer Roxanne First). The raffle ended this morning and raised a tidy of sum of $89,277.55.

Is this a product category to jump on? I think so, and there are obviously a gazillion sources for Connell Waldron’s chain in some form or another. With Father’s Day coming up on June 21 and recent/upcoming graduations, maybe this is indeed something to promote. (In an article about @connellschain the Daily Mail reported in May that U.K. e-tailer Asos had seen a 130% spike in men’s jewelry sales.)

A  few options to consider below.

Top: Chain reaction! Actor Paul Mescal as Connell Waldron in Hulu’s Normal People. Given the popularity of the character’s signature accessory, the actor helped raise nearly $90,000 for charity via the raffle of a similar chain from his personal collection (image via @connellschain).