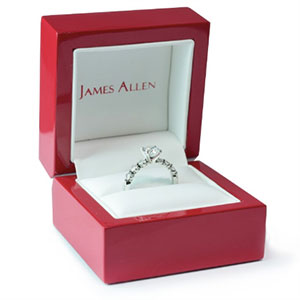 This morning Signet posted its earnings for the second quarter, ending Aug. 4, which revealed modest overall gains—largely as a result of end-of-season clearance sales and robust sales at Piercing Pagoda, Zales, and recently acquired James Allen.

Signet’s total sales for the quarter were $1.42 billion, and total same-store sales performance was up 1.7 percent, versus the prior year quarter.

Broadly, the increase in total sales of $20.5 million in the quarter was positively impacted by four factors, according to the company: same-store sales performance; the addition of James Allen (acquired in September 2017); the application of new revenue recognition accounting standards; and foreign exchange translation benefit.

James Allen sales were $54.4 million in the quarter, up 25.3 percent compared to the same period in 2017, and had a positive 80 BPS impact on total company same-store sales.

Same-store sales increased at Zales by 7.1 percent and at Piercing Pagoda by 11.5 percent. Less impressive were Jared, which saw sales grow by 1.2 percent, and Kay, which saw a same-store sales decrease of 2.1 percent in the quarter (the retailers were struggling in the first quarter, too).

Online was a bright spot. E-comm sales increased across all retail brands and accounted for 10.6 percent of second quarter sales, up from 5.9 percent of total sales in the prior year’s second quarter.

Signet CEO Virginia Drosos, said in the statement, “During the second quarter, we continued to see stabilization in same-store sales, and we remain confident that we have the right strategies in place to continue to drive operational improvement over the long-term.

“To reflect our improved second quarter performance, we are modestly raising our revenue and earnings guidance for the year. For the fourth quarter, however, where a vast majority of our annual operating profit is generated, we are remaining appropriately cautious in our outlook, as many of our Path to Brilliance initiatives are being launched later in the year.”

Drosos called Signet’s recent transition to a fully outsourced credit structure a quarter highlight, explaining, “Our teams are now able to fully focus on optimizing performance within the new credit structure, which will be critical to driving a successful holiday season.”