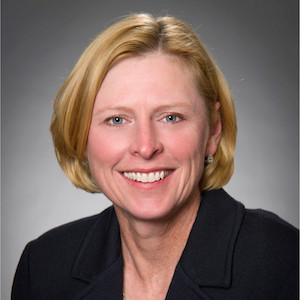 Judith Lynn Dennison (pictured), who currently serves as Signet’s chief legal and transformation officer, has voluntarily decided to resign as of Aug. 31, the company announced in an 8-K filed with the Securities and Exchange Commission on July 1.

Dennison has been with the company since 2011 and has been in her current position since February 2018. She has also served as company secretary since 2019.  She left to “pursue other opportunities,” Signet said, adding it “is grateful for Ms. Dennison’s significant contributions.”

In its annual 10-Q, the company also announced that on Saturday it had settled in principle four shareholder suits, which accused the company of failing to properly disclose issues with its credit portfolio, as well as sexual harassment claims that arose amid its ongoing gender discrimination arbitration.

The issues were substantially the same as those raised in previously settled litigation, except that they covered a different time period.

Signet expects it will record a pretax charge of $8.5 million from the settlement, net of expected insurance recovery. Under the proposed settlement, these plaintiffs will now join the class action that was previously settled.

Signet vice president of corporate affairs David Bouffard tells JCK: “We continue to believe there was no merit to the claims, and that we provided the appropriate disclosures in accordance with regulatory and legal requirements. We’ve entered into a settlement agreement simply to avoid further legal costs and associated business distraction and to eliminate any litigation risk. As we enter our third year of our Path to Brilliance transformation, our entire business is focused on emerging as a higher value company and the OmniChannel category leader.”