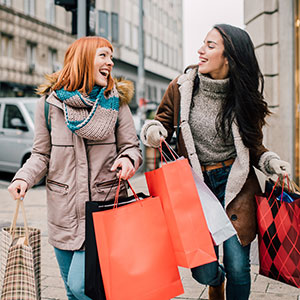 Retail sales exceeded expectations in September, proving that the effects of the ongoing COVID-19 pandemic haven’t extinguished our collective will to shop (or indulge in retail therapy).

The U.S. Department of Commerce reported Friday that overall retail spending was up a modest 1.9% from August and that spending rose across most categories. September sales were up 5.4% compared to September 2019.

One of the most welcome statistics in the report was that department stores, which have been in an economic tailspin since the pandemic began, saw a 9.7% increase in September. The rise indicates that U.S. consumers are finally returning to shopping malls after a half-year absence that saw mall traffic plummet roughly 27% year-over-year in August, according to foot traffic analytics firm Placer.ai.

And both back-to-school and the changing of the seasons helped boost apparel in September by 11%, after months of declines in the category.

The upswing in consumer spending is great news for retailers but is surprising considering the havoc—mass layoffs, furloughs, etc.—that COVID-19 has wreaked on the economy. And many retail industry watchers are waiting for the other shoe to drop because September’s strongish numbers don’t make up for the significant losses retailers have suffered for half a year.

And there are other factors tugging on the overall economy.

Job growth slowed in September, with employers adding just 661,000 new workers, according to the Labor Department’s latest report. Unemployment improved slightly: It went down to 7.9% from 8.4% in August. But economists say that’s largely a result of people leaving the workforce, particularly women (the effects of millions of Americans suddenly becoming home-schoolers this fall have included women leaving the workforce in September at four times the rate that men did, according to NPR).

Economists have been pointing to a divide between affluent consumers and Americans who are really struggling and say the economic chasm between the two is widening and detrimental to economic recovery. Affluent shoppers can prop up the retail industry temporarily (as some say is happening now), but the health of the American retail landscape relies on participation from consumers on all socioeconomic tiers.

We wrote about the so-called K-shaped economic recovery many experts are predicting, in which the rich get richer and everyone else suffers.

And that could certainly play out. Lower-income Americans have been disproportionately impacted by the COVID-19 recession: Americans making at least $60,000 a year fully recovered their jobs by mid-June, according to an Opportunity Insights analysis of Labor Department data. While 35% of jobs held by the the nation’s lowest earners disappeared.