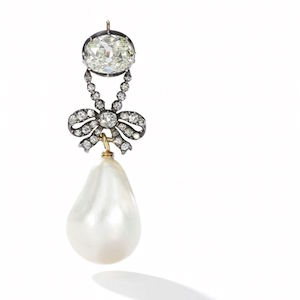 Sotheby’s will auction some long-unseen jewels that belonged to doomed French queen Marie Antoinette at an auction in Geneva on Nov. 12.

Antoinette, now considered a symbol of the excess of prerevolution France, was long known for her love of pearls and diamonds and was often seen wearing both. The 1785 “affair of the diamond necklace”—a scandal in which Antoinette was accused of not paying for a necklace adorned with 647 gems—is often cited as one of the causes of the French Revolution.

Highlights of the sale include a diamond pendant (pictured above) believed to be owned by Antoinette, which supports a 26 mm x 18 mm natural pearl. It carries a $1.2 million estimate. 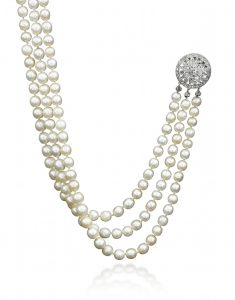 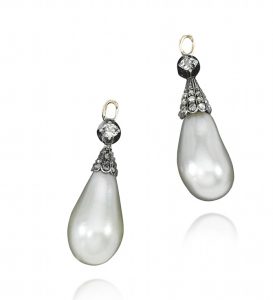 Besides their storied provenance, the jewels also have an amazing story. As Antoinette, husband King Louis XVI, and their children prepared their escape from France in 1791, the queen wrapped all her jewels in a wooden chest and sent them to Brussels, then ruled by her sister, Archduchess Marie Christine. From there, they were then sent to Vienna, to be kept by the Austrian emperor, Marie Antoinette’s nephew.

In 1792, the royal family was imprisoned in the Temple tower. Louis XVI and Marie Antoinette were beheaded, and their 10-year old son, Louis XVII, died in captivity. The royal family’s only surviving child, Marie-Thérèse de France, was released after three years of solitary confinement and was sent to Austria, where she was given her mother’s jewels.

De France, otherwise known as “Madame Royale,” had no children of her own and bequeathed part of her jewelry collection to her niece and adopted daughter, Louise of France. She in turn left them to her son, Robert I, the last ruling duke of Parma.

In a statement, Daniela Mascetti, deputy chairman of Sotheby’s Jewellery Europe, said the “Royal Jewels from the Bourbon-Parma Family” sale spotlights “one of the most important royal jewelry collections ever to appear on the market.… Never before seen in public, this extraordinary group of jewels offers a captivating insight into the lives of its owners going back hundreds of years. What is also striking is the inherent beauty of the pieces themselves: The precious gems they are adorned with and the exceptional craftsmanship they display are stunning in their own right.”

Another piece of jewelry believed to have been owned by European royalty from the period—a previously unknown 6.16 ct. blue diamond—was auctioned by Sotheby’s in May.