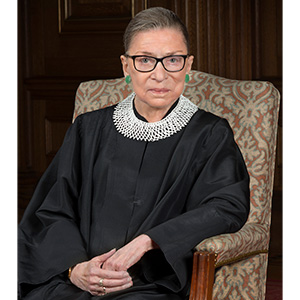 Supreme Court Justice Ruth Bader Ginsburg passed away Friday at the age of 87 after a lifetime spent fighting for equal rights for women and the underserved.

Her brilliant legal mind, unflappability, and capacity to empathize and connect with those she disagreed with will be remembered as her most remarkable attributes. But she also brought a touch of style to the highest court! Through the many creative collars she wore over her staid black judge’s robe, she (along with Justice Sandra Day O’Connor) wrote the book on how women might express and own their femininity in male-dominated institutions.

Ginsburg’s collars weren’t simply attractive. They often signaled her position on court decisions, and her feelings about certain rulings.

She famously maintained a large collection of collars, bib necklaces, and frilly jabots, and told The Washington Post in 2009 that she began collecting neckwear because “the standard robe is made for a man because it has a place for the shirt to show, and the tie.” She and O’Connor, the first woman on the court, “thought it would be appropriate if we included as part of our robe something typical of a woman.”

Most iconic among her neckwear was the  “dissent collar”—a silver-and-black Banana Republic bib necklace that evoked diamond-studded armor—that she wore from 2012 on when expressing her disapproval of a decision. “This is my dissenting collar.… It looks fitting for dissents,” she once told Katie Couric. 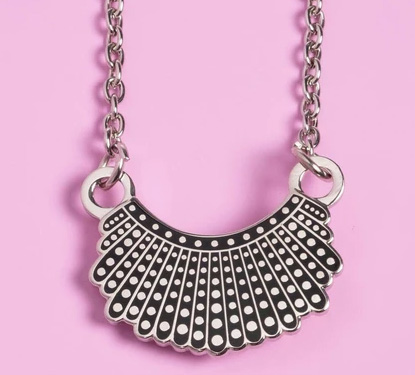 Ginsburg’s “majority opinion” neckwear was a gorgeous golden crochet and metal collar that was a gift from her law clerks.

She understood intuitively the power of style to broadcast victory, defeat, and alignment.  At a swearing-in ceremony for new American citizens in 2018, she wore a colorful bib necklace that borrowed aesthetics from African tribal jewelry. The late justice was a huge opera fan, and a bold black-and-white collar she wore on occasion, hailing from the New York Metropolitan Opera gift shop, was a replica of the collar worn by Plácido Domingo in Verdi’s opera Stiffelio.

Reportedly, her favorite collar was a simple white, beaded woven style from Cape Town, South Africa (see her in that collar, above), which she stored on a flat surface for easy accessibility, although she kept most of her collars on hangers.

One of the last new collars she wore debuted in a 2018 portrait of the Supreme Court. The spiky metal collar necklace was a $198 Stella & Dot bib gifted to her by a fan, Los Angeles–based lawyer and mother Susan Hyman.

Hyman told Town & Country at the time that she felt the necklace projected “strength, confidence, and fearlessness.” Ginsburg wrote her an elegant note back that read: “For today’s surprise package, a thousand thanks. The necklace is exquisite. I will enjoy wearing it on the bench and off as well. With huge appreciation, Ruth Bader Ginsburg.”