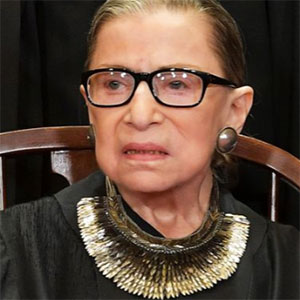 Supreme Court Justice Ruth Bader Ginsburg famously maintains a large collection of collars, collar-like necklaces, and frilly jabots that she uses to dress up her plain black robe—and also to signal her position on court decisions.

She’s introduced the world to her “Majority Opinion” jabot (golden and embellished) and a “Dissent” collar that resembles a piece of mini medieval armor (that one’s  spawned several homage products on Etsy, and this “Dissent Pin”).

So when Justice Ginsburg donned a spiky metal collar necklace no one had seen before for the recently released Supreme Court portrait, RBG watchers wondered if the necklace had meaning and where it came from.

Town & Country solved the mystery, and it neatly falls into RBG’s lifelong narrative of graciousness. The layered necklace is a $198 Stella & Dot bib (style name Phoenix) that was recently gifted to Justice Ginsburg by a fan—Los Angeles–based lawyer and mother Susan Hyman.

Hyman, who works part-time for Stella & Dot, told Town & Country that she herself wore the necklace style to an L.A. screening of the documentary about Justice Ginsburg, RBG. “I wore [it] in tribute to RBG because it reminded me of some of the ‘dissent collars’ she has worn,” Hyman told the outlet.

She sent Justice Ginsburg a limited-edition version of the Pegasus necklace, which to Hyman projected “strength, confidence, and fearlessness,” qualities that have made Ginsburg a personal hero for her. In her note to the justice, she wrote that she hoped Ginsburg “would wear it with pride and joy.”

Soon after, Hyman received an elegant hand-written note from Justice Ginsburg on the judges’ official stationery. It read: “For today’s surprise package, a thousand thanks. The necklace is exquisite. I will enjoy wearing it on the bench and off as well. With huge appreciation, Ruth Bader Ginsburg.”

To Hyman’s surprise, she wore it for the very next Supreme Court portrait (above).

Hyman told the outlet she shared the news with a Facebook group composed of more than 11,000 lawyer moms that she’s active in. Nearly everyone agreed that Ginsburg, the ultimate lawyer mom, “was giving us a secret wink and nod in solidarity with us—and an appeal to keep on fighting for women’s equality,” Hyman said. “She is one of us!”

(Photos courtesy of the Supreme Court of the United States)