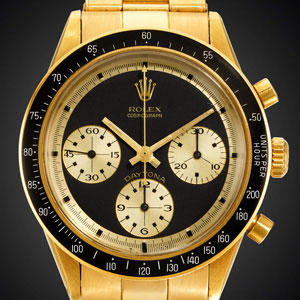 The watch—an ultrarare Rolex Daytona JPS reference 6264 in 18k gold—is so sought after, Sotheby’s gave the timepiece its own online auction.

And when it fetched $1.5 million in its single-lot online sale in London on Friday, it broke the auction house’s own record price for a watch sold in an online auction (a feat Sotheby’s has actually pulled off twice since April).

The 1969 John Player Special was named after the legendary 1970s Formula 1 livery because of its black and gold Paul Newman dial. It’s one of the only ones known to exist. Its hammer price set the record for the most paid for a wristwatch sold in the U.K. and the record for the highest sum paid for any Daytona JPS ever.

The watch, which had never appeared at auction before, received 17 bids from five bidders, which drove the final price of the watch well above its presale estimate of $400,000–$800,000.

Sotheby’s, Christie’s, Phillips, and other auction houses, most of which have switched to all-online auctions since the COVID-19 pandemic began, have closed a handful of huge sales this spring and summer and in general have seen no slackening in interest from top-tier watch and jewelry buyers.

“Not even a global crisis can halt the rise and growth of the vintage watch market,” noted Phillips senior consultant Aurel Bacs in a prepared statement released after Phillips’ Hong Kong Watch Auction X raked in more than $14 million in mid-July, led by a few rare Patek Philippe watches.

Even more astounding: A 28.86 ct. emerald-cut diamond beat the record for the most expensive jewel ever sold in an online auction when it fetched $2,115,000 during the Christie’s Jewels Online sale, which ran June 16–30.

Since the beginning of 2020, the Sotheby’s weekly watch auctions have brought a combined total of $48 million. Daryn Schnipper, worldwide chairman of Sotheby’s international watch division, said in a statement, “In a year that has seen so many successes…many myths have been debunked, in particular the assumption that historic timepieces won’t sell well online. It’s been fascinating to see antique pieces generating so much passion online and on social media—further proof that historic timepieces are so relevant today. They transcend the function of mere timekeeping to tell us the history of the modern world.”