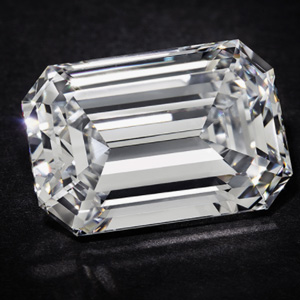 A 28.86 ct. diamond beat the record for the most expensive jewel ever sold in an online auction when it fetched $2,115,000 during the Christie’s Jewels Online sale, which ran June 16–30.

The D-color, VVS1, type IIa diamond easily smashed the previous record for the most expensive jewel sold in an online auction, which was set by a pair of Graff ruby and diamond hoop earrings that brought in $187,500 at the Christie’s February 2020 Online Jewels sale.

Type IIa diamonds comprise less than 2% of all diamonds and are the most chemically pure. Famous examples of type IIa diamonds include the 530.2 ct. Cullinan 1, the largest clear cut diamond in the world, and the 105.6 ct. Koh-i-Noor, which is part of the British crown jewels.

The 28.86 ct. that sold Tuesday, which JCK editors discussed during the latest episode of JCK’s Jewelry District podcast, inspired 31 competitive bids from buyers around the globe.

The diamond was the highest-valued lot ever offered in a Christie’s online sale and was estimated to sell for $1 million–$2 million. It received bids immediately when the sale went live on June 16 and was the subject of some fierce bidding by the time the sale wrapped up on Tuesday.

“The stone possesses a transparency and purity which can only be found in the world’s finest diamonds,” Rahul Kadakia, Christie’s international head of jewelry, said in a statement. The sale, he added, demonstrated “greater client confidence in Christie’s digital ability and online sale platform. We now look forward to the beginning of our live auction season for jewelry spanning all major Christie’s global sale sites.”

On July 9, Christie’s Hong Kong will offer a 12.11 ct. fancy intense blue internally flawless diamond valued at $8 million in its Online Jewels sale. If it sells for more than $2.2 million, it will be the new record holder for most expensive jewel sold in an online auction.

Both Sotheby’s and Christie’s have made several impressive sales in their online auctions since the COVID-19 pandemic began. So much so, they’re perhaps establishing a “new normal” for high-end jewelry auctions—one that’s digital first.