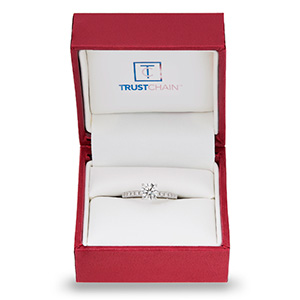 A new blockchain initiative spearheaded by Richline working with IBM will be able to tell consumers where the gold and diamonds in specific rings come from.

TrustChain Jewelry is still in its pilot phase, but Richline chief marketing officer Mark Hanna says his company hopes to scale it up and make it available to the entire industry.

“We have set it up from the beginning with IBM to be open source and to include the rest of the industry,” he says. “We never did this for Richline. We wanted a complete industry perspective.”

For now, the project covers six specific ring styles. The technology allows the company to verify that the gold in the specific rings originated from the Wharf mine in South Dakota and was refined by Asahi Refining and then cast by Richline sister company LeachGarner. The diamonds are verified to be from Rio Tinto’s Canadian mine, though the project’s initial announcement does not provide information on where they are cut. All the listed companies and entities are part of the consortium backing the pilot project.

UL, formerly known as Underwriters Laboratories, has been brought in to verify the accuracy of the data.

Eventually, the initial group of rings will be sold at Helzberg Diamonds, which, like Richline, is owned by Berkshire-Hathaway.

How all this will be presented to the consumer is an open question, Hanna says.

“We are going to test some consumer messaging this year but not a lot.… We are a long way from commercializing this.”

Hanna says that the blockchain technology not only makes the data impossible to change, but it provides economic efficiencies.

“We did something like this 10 years ago, which was basically chain of custody,” he says. “Chain of custody is costly, and there are lot of people and paperwork involved. The blockchain allows us to digitize the data.”

While there are additional costs involved for now, eventually the goal is to make the entire process “cost neutral,” he says.

And he believes projects like this are essential for the industry’s future.

“A lot of people are already looking at blockchain, especially in the diamond industry. They are recognizing the need for more transparency and for responsible practices. Somewhere between 66 to 75 percent of millennial consumers consider ethical sourcing to be as important as quality. Richline is a precious-metals company. Our viability depends on being in a market that will continue to grow,” Hanna says.