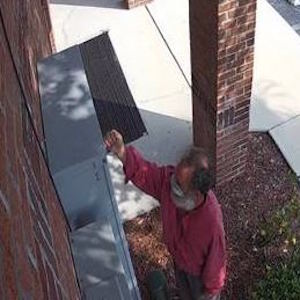 Most jewelers are currently closed for business, but not all would-be burglars are taking a break, says the Jewelers’ Security Alliance (JSA).

“The jewelers have done a good job putting everything away,” he says. “There isn’t the same temptation for the bad guys going in the store. They know the product isn’t out.”

In general, burglary attempts have fallen since COVID-19 began spreading across the United States in early March.

“We usually get 250 burglaries, or burglary attempts, a year. That’s five or six a week. Now, when we have one, it’s a big deal.”

Kennedy gives several reasons for this: “The criminals are definitely lying low. They can’t case the store. And no one is allowed to be out. If you’re out on the street now, you don’t have the cover of darkness and crowds to protect you. Plus, where you are going to fence it?”

Instead of the “professional burglary gangs” that usually target jewelers, a lot of the current criminals are unskilled, he says.

Among the recent burglary attempts JSA has tracked:

– On April 7 in Chicago, burglars broke through a wall from an adjoining store into the bathroom of a jewelry store. They took only a small amount of merchandise that had been left out of the safe.

– On April 12 in Burbank, Ill., burglars broke into a jeweler’s through the wall of the store next door and attempted to cut into the safe. They weren’t able to but snatched various low-end items that had been left out.

– On April 12 in Orlando, Fla., a burglar in a surgical mask tampered with a jewelry store’s power box at 4:40 p.m. (pictured). The person did not get into the store.

– If local laws permit it, retail jewelers (or their security companies) should regularly inspect their stores, including their roofs, alarm boxes, and electric junction boxes. Some jewelers can also inspect their store remotely through their surveillance system. Even the occasional drive-by is better than nothing, JSA says.

– Put all jewelry away in a safe or vault. If lower-value goods can’t fit in a safe, make sure that merchandise is locked away in a closet or drawer and not visible to someone who could be casing your store.

– Jewelers should respond to all cases of power interruptions or tripped alarms, though only accompanied by a police officer or guard. Following a power cut, all points of entry, including the roof and sidewalls, should be checked.

– Retailers should consider storing high-dollar merchandise in a bank vault, if their insurance policy permits. Jewelers Mutual Insurance Co. has arranged with Malca Amit to let covered jewelers have their merchandise picked up and stored in Malca’s vaults while their stores are closed.

‑ Owners should check their alarm system, including motion detectors and camera systems to make sure they are functioning.

– Employees should not take merchandise home, as this creates a whole new set of security risks for jewelers and their families. If they feel they must take jewelry home, exercise extreme discretion.

Kennedy says that a lot of stuck-at-home jewelers are selling using a combination of social media, curbside pickup, and drop-offs.

For instance, if a store does curbside pickup, it’s best to have two employees involved—one to hand off the item and one to stay in the store.

“You don’t want to leave the owner exposed to a possible criminal,” Kennedy says.

And what about the handful of stores that are reopening? Kennedy recommends following the standard security procedures, including not resisting any robberies, keeping showcases locked, and showing only one piece at a time.

One recommendation, however, no longer applies. JSA generally warns jewelers to be wary of customers sporting masks. But now that the Centers for Disease Control and Protection has recommended wearing face coverings outdoors, jewelers should not ask people to remove them, especially once they’re in the store.

For one, it might aggravate possible consumers. For another, “if they’re a criminal, they just might pull out a gun,” Kennedy says.

In general, a plain surgical mask isn’t a great way to conceal one’s identity, he adds. But if someone is also wearing a hat, sunglasses, or other ways to hide their face, that’s a possible red flag.

More security tips can be heard in Kennedy’s interview on the JCK podcast, The Jewelry District, and on the JSA site.