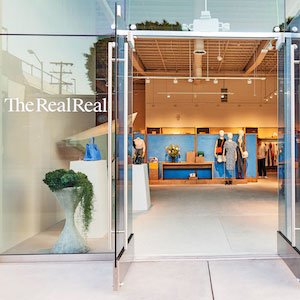 Luxury consignment e-tailer The RealReal is opening its second retail store (pictured, right) in Los Angeles and has just raised $115 million to open others.

The new 12,000-square-foot store is located on Melrose Avenue in West Hollywood, Calif. It includes a separate 5,500-square-foot men’s store, a place to drop off consignment items, a café serving up coffee and pastries, and a personal styling service. The store also intends to offer “workshops and master classes” in styling, authentication, and design.

This is the company’s second concept store. The first opened in November 2017 in the SoHo district of New York City. The RealReal also has seven brick-and-mortar locations where consignment items can be dropped off and appraised. Those are located in Chicago, Dallas, Los Angeles, Miami, New York City, San Francisco, and Washington, D.C.

The news comes as the San Francisco–based company announced that it has received $115 million in new financing. The money raised in this Series G round will go to opening more stores in other markets, CEO and founder Julie Wainwright said in a statement.

With this latest infusion of funds, The RealReal has now raised a whopping $288 million in equity capital.

The round was led by PWP Growth Equity, the mid-market private equity group of Perella Weinberg Partners, and included participation from Sandbridge Capital and existing investor Great Hill Partners. As part of the investment, Chip Baird, a partner at Perella Weinberg, will join The RealReal’s board of directors.

Last year, Michael Groffenberger, managing director for The RealReal’s luxury consignment offices, told JCK  that pre-owned jewelry and watches are among the two fastest-growing categories for the site.

And in January, the site announced it was partnering with the University of Arizona to create an endowed chair in gemology.

(Images courtesy of The RealReal)